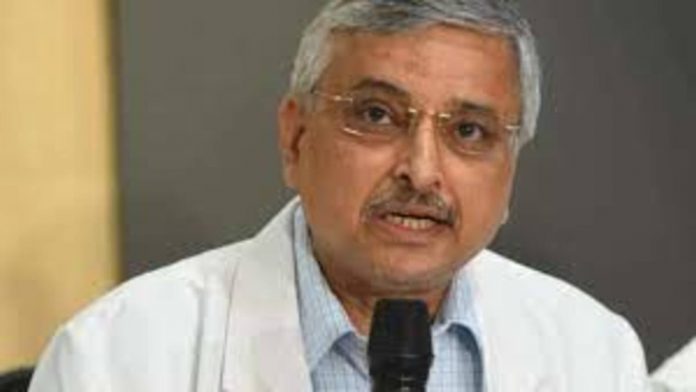 During the time of high demand for medical oxygen and and people rushing to the hospitals AIIMS Director Dr Randeep Gulera on Thursday said that oxygen saturation levels around 92-93 are not considered to be critical but these levels need to be considered as buffer level that the patients needs to be look after.

“Misuse of oxygen cylinders is a serious matter of concern these days. A few people stock oxygen cylinders at home, fearing that they may need it later. This is not advisable. If your oxygen saturation level is 94 per cent or above, it still means there is sufficient oxygen in the body. There is no need to panic. Misusing the same by a person with normal levels of oxygen can deprive someone whose saturation level is well below 90 or 80,” he said stressing upon the judcious use of oxygen.

“Previously when we used to do prolonged oxygen therapy for people with lung diseases, we have seen people doing fine in oxygen saturation of even 88 per cent. Oxygen saturation of 92 or 93 should not be considered critical. But this is a buffer level when you can seek medical help without panicking,” said Dr Randeep Gulera.

“Oxygen is crucial for the treatment of patients with severe Covid-19, since the disease affects lung functioning. Shortness of breath or difficulty of breathing is one of the most common symptoms in patients with severe Covid-19. It also hampers the supply of oxygen to various parts of the body. They hence need oxygen therapy, to be supplied through medical oxygen,” he further said.

However, the latest clinical guidance by the Health Ministry said that an oxygen concentration less than or equal to 93 per cent on room air requires hospital admission, while that below 90 per cent is classified as a severe disease, that requires admission in ICU.

“However, given the prevalent situation in the wake of the second wave, we must do whatever we best can, in order to try and replenish our oxygen levels, in the event of delay or inability in getting hospital admission as per the clinical management protocol and people are now using oxygen concentrators while at home,” said experts.

On questioned over whether one should buy an oxygen cylinder Dr Guleria said that stocking oxygen at home without even knowing its proper usage fully a wastage. “One common example of oxygen wastage is when patients are given food, they take the oxygen mask off and keep it at the side without switching off the connection,” he said.

“There are also additional requirements and rules for medical oxygen, including requiring a person to have a prescription to order medical oxygen. It is important for citizens to ensure judicious use of the vital product, especially during a public health emergency. Misuse or overstocking of these will only lead to panic and black marketing,” said the Health Ministry.