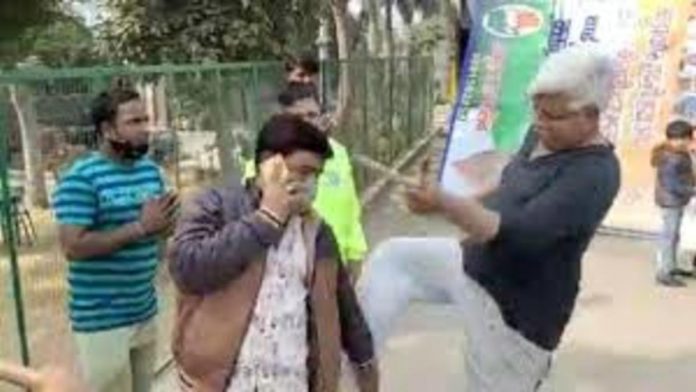 A video purportedly showing a former Congress MLA in the Okhla space of the city caning and abusing staff of the South Delhi Municipal Corporation (SDMC) for removing hoardings and banners set up by him has surfaced.

Responding to the occurrence, police on Friday said they will enlist an FIR regarding the issue.
Although, former Congress MLA Mohammad Asif Khan said he had no information that they were SDMC staff.

“I don’t know who they were. I have also received no call or a message from the SDMC about the incident,” said Mr Khan.

The video of the occurrence purportedly showing Khan beating four men with a stick and guiding them to hold their ears while doing squats surfaced on Friday.

Khan told PTI he had seen that for a long while, hoardings set up by him in the Okhla region were immediately removed while those of a local AAP MLA and municipal corporations stayed untouched.

“I saw that some men were removing Congress party hoardings and posters near by home in Okhla. When I questioned why they never removed posters and hoardings of other parties, they did not answer. I just taught them a lesson. I have no idea who they were,” he further said.

A senior SDMC official said on state of secrecy that individuals being exposed to “disrespect” have a place with the community body.

“The matter has been discussed with deputy commissioner Central Zone. Appropriate legal action is being taken by Zonal Authorities,” said the official.

The remunerative projects cell of the municipal corporation is answerable for removing unapproved promotion materials and infringements.