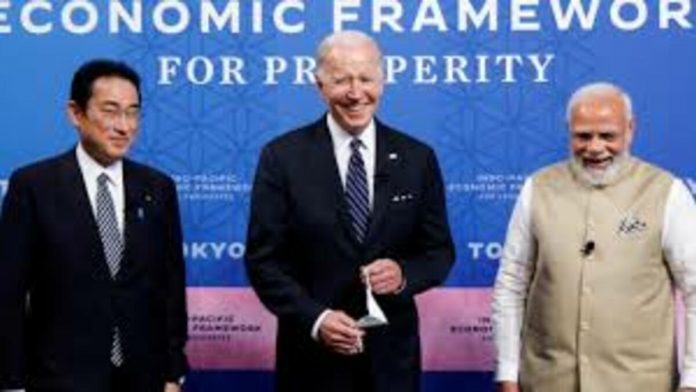 Prime Minister Narendra Modi on Monday ratified India’s entry to Indo-Pacific Economic Framework (IPEF) together with 12 other counties including US. The move is taken to boost economic cooperation and counter China’s growing clout over the region through geostrategic power.

The other countries who joined the IPEF include Japan, Indonesia, Australia, Malaysia, New Zealand, South Korea, Singapore, Thailand, Philippines, Vietnam and Brunei Darussalam. This comes ahead the second Quad summit, that is to be held in Tokyo.

Biden Administration, who initiated this IPEF diluted the language of joint statement to permit more countries to join the initiative. However, the statement does not allow launching of discussions over trade deal. It only assures to start “collective negotiations towards future negotiations” with an aspirational wish list.

Speaking during the launching event in Tokyo Prime Minister Modi said, India will co-operate with other memeber countries to build an “inclusive and flexible” IPEF. “The Indo-Pacific Economic Framework is a declaration of our collective will to make the region an engine of global economic growth. I believe that there should be three main pillars of resilient supply chains: Trust, Transparency, and Timeliness. I am confident that this framework will help strengthen these three pillars, and pave the way for development, peace. and prosperity in the Indo-Pacific region,” he said without mentioning the other three pillars of the offered trade deal.

“Our efforts include, but are not limited to, cooperation in the digital economy,” the statement further said without eliminating tarrif dicussions under the offered trade deal.

The White House made the objectives of Biden Administration clear by releasing a fact sheet. “We will pursue high-standard rules of the road in the digital economy, including standards on cross-border data flows and data localisation. We will also seek strong labor and environment standards and corporate accountability provisions that promote a race to the top for workers through trade,” said the fact sheet.

India and US have differing views on many issues like labour, digital commerce and environmental standards. India is firm against adding such standards in any of the free-trade agreements it ratifies.

Meanwhile, a professor of economics at Jawaharlal Nehru University, Biswajit Dhar said that language used in the joint statement is too ambiguous and broad. “This allows each leader to interpret the animal the way he wants it. But India certainly needs to take it very seriously. We should weigh the proposals very carefully looking at our own comfort level, especially on the regulatory coherence front,” he stated.