Despite asserting that Narendra Modi speaks fluently because of a teleprompter Mamata Banerjee failed to prove that in the video that has gone viral on social media. 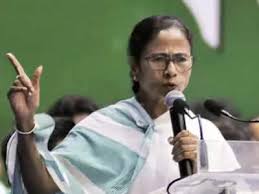 Bengal Chief Minister Mamata Banerjee is being heard in a viral video saying that she speaks better Hindi than Prime Minister Narendra Modi . Despite asserting that Narendra Modi speaks fluently because of a teleprompter she failed to prove that in the video that has gone viral on social media.

It is being suspected that she used an abusive slang in the video and that she has used the word for 59 seconds in the video after saying a Gujarati phrase, ‘Kem Cho’. And the video has become a source of major laughter on the social media.

After re-checking the video in rumour meticulously it is clear that she has not used any abusive word but then the video is still a source of laughter but abuse is not there in the video.

In the video, Mamata Banerjee exaggerated that she is even fluent in Gujarati. In order to prove her proficiency in the Prime Minister’s mother tongue, she says, “Kem Cho? Bhal Cho.” ‘Kem cho’ is a common Gujarati greeting that translates to “How are you?” ‘Bhal cho’ was Banerjee’s attempt to demonstrate her fluency in Gujarati.

‘Bhalo’ means good in Bengali. So, the response to ‘How are you’ in Bengla is usually ‘Ami bhalo aachhi’, which translates to “I am good” or “I am doing well”. In Gujarati, the common response is ‘majhama’. What language ‘bhal cho’ falls under is anybody’s guess but quite clearly, it was Mamata Banerjee answering the Gujarati greeting in a twisted mixture of Bangla and Gujarati.

Nevertheless, the speech had multiple hilarious moments. In heavily accented Hindi, the West Bengal Chief Minister exaggerated about how she could fluently read the script. She even read a couple of lines to prove it. She claimed that the Prime Minister read from a teleprompter that had the words in the Gujarati script.

She did not stop there and went on to claim that she is well versed in Punjabi. She insisted that people talk to her in Punjabi so that she could demonstrate her fluency. She also said that she had traveled far and wide in Punjab during the terrorism years, which she described as ‘godhbodh’. ‘Gadhbadh’ is a Hindi word that roughly translates to disturbance.

Mamata Banerjee said that she had some difficulty distinguishing between different individuals because according to her, all of them looked the same. She also said that she eats ‘Halwa’ from Gurudwaras and ‘Litti’ from Biharis.

Such eccentric speeches are not new to the Bengal Chief Minister. In one speech, she hailed ‘Jai Bishnu Mata’. Vishnu is a male Hindu God and definitely not considered a mother (Mata). The Trinamool Congress is suffering a string of defections, which could perhaps explain her eccentricity in the speech. However, it is still not clear precisely when the speech is from.