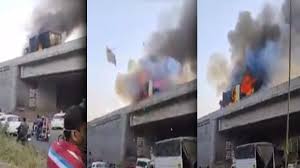 A short video got viral on social media claiming that an oil tanker caught fire and exploded on a flyover in Gachibowli, Hyderabad.

Several social media users have posted the viral video on their facebook feeds which consist of a 25 second video with a caption stating, “Oil tanked got fired up and burst on Gachibowli flyover, Hyderabad”.

A team of fact checkers have found that the incident did not take place at Gachibowly flyover, Hyderbad but on Warje bridge in Pune around a month ago. It is also found out that the vehicle was not an oil tanker but a running truck, whose driver jumped off from the truck to save his life.

The team rechecked the video and the post with the help of InVID and reverse image search and they found that the same video was uploaded by many YouTubers mentioning the place as Warje flyover, Pune in the first week of December 2020.

With the help of keyword search they also found that Dainik Bhaskar published an article regarding the same which carried the same video.

As per the article published in Dainik Bhaskar, the incident took place on December 5, 2020, in which a running truck caught fire on Warje flyover in Pune. No one was injured in the incident and the driver jumped off from the truck to save his life.

According to the police the truck was carrying food items, and due to the vehicular movement of the burning truck at Katraj-Dehu bypass, towards Kolhapur from Mumbai was affected.

So, when the video started getting viral mentioning the incident from Gachibowli flyover in Hyderabad, the Cyberabad police on January 14, 2021 issued a clarification by tweeting, “This viral video is not of Gachibowli flyover. It is a FALSE news. It had happened on the Warje bridge, Pune a few days back. No such incidents have occurred in Hyderabad”.

Hence, it is proven that the claim made was false and is misleading people by showing the incident from Hyderabad and also of an oil tanker but it was truck which caught fire in Pune a month ago.