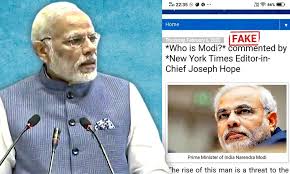 An article in ‘The New York Times’ eulogising Prime Minister Narendra Modi is widely shared on social media which is said to be written by its editor-in-chief Joseph Hope. The editor has called Modi a “dangerous patriot” being said to be written by the editor-in-chief of “The New York Times”, is being widely circulated on social media. Joseph Hope, the said editor, calls Modi a “dangerous patriot” whose leadership skills and political shrewdness are posing a serious threat to other superpower countries.

Many Twitter and Facebook users have shared the content, claiming that it was published by “The New York Times”. The same article was also posted in some blogs with the title “*Who is Modi?* commented by *New York Times Editor-in-Chief Joseph Hope”.

“Narendra Modi’s sole aim is to make India a better Country.. If he is not stopped, in the future India will become the most Powerful Nation in the World.. It will surprise the United States, the United Kingdom, and Russia..” reads part of the text.

A research team has found that “The New York Times” has not published the article. It said there is nobody by the name “Joseph Hope” in the organisation and its editor Dean Baquet has written no such article on Modi.

Not an New York Times article

The language of the viral article makes it look suspicious from the very beginning. The lousy sentences and grammatical errors are unlike the editorial standards of “The New York Times”.

The research team also found an independent researcher named “Joseph Hope” who writes for Asia Times. But none of his articles match with the viral one.

On asking from Danielle Rhoades Ha, vice president, communications, at NYT about the matter. She mailed back refuting the viral claim, saying no such article was published in The New York Times and “No one named Joseph Hope works for The New York Times”.

She further said, “The editor of The New York Times is Dean Baquet and he has not said or written the attached message. Our newsroom is independent and relies on original reporting from more than 1,700 journalists; our global report can be found at NYTimes.com.”

In October 2020, “The New York Times” had written an article on the Indo-China border tensions, wherein it said, “Mr. Modi, a Hindu nationalist, has been criticized heavily for actions that have disenfranchised Muslims in India”.

Hence, it is clear that the viral message claiming NYT editor-in-chief Joseph Hope wrote an article praising PM Modi is false. Neither does any Joseph Hope work at NYT nor has anyone else at the media organisation written such an article about PM Modi.