While Rajdeep Sardesai deleted his tweet spreading fake news, Rajdeep had even spread this dangerous narrative on Television on India Today, adding extra spice to the news. 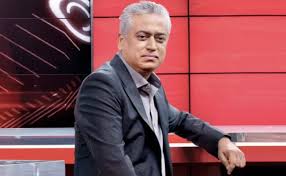 While the anti-farm law protestors unleashed havoc on the streets of the National Capital on 71st Republic Day, several journalists and intellectuals came forward to whitewash their acts. Senior journalist at India Today, Rajdeep Sardesai tried to pull off a similar stunt by sharing fake news about a ‘farmer’ dying in police firing.

While being fully aware that his tweet can potentially aggravate the sensitive law and order situation in Delhi, Rajdeep tweeted, “One person, 45-year-old Navneet killed allegedly in police firing at ITO.” In a bid to pump up emotions, he added, “Farmers tell me: the ‘sacrifice’ will not go in vain.” To further sensationalise the matter, he tweeted a picture of the deceased’s body covered in the Indian tricolour.

However, Rajdeep’s own news network had reported that the man died after his tractor had overturned. “One person died after a tractor overturned at Delhi’s DDU Marg on Tuesday during the violent protest in the borders and several parts of the National Capital,” the India Today report said.

On being called out on social media, Rajdeep Sardesai quietly deleted the tweet without tendering any apology. In this way, those who had shared the fake news once would live under the false impression that it was indeed a case of police firing.

While Rajdeep Sardesai deleted his tweet spreading fake news, Rajdeep had even spread this dangerous narrative on Television on India Today, adding extra spice to the news. Rajdeep went on television and said that the farmer was “shot in the head”. He claimed that Navneet Singh was driving the tractor and he was “shot in the head” and suffered a bullet injury that resulted in his death.

Journalist Anurag Shrivastav had also shared the video of the incident which took the life of the victim. In the footage shared by him, several protestors could be seen driving their tractors at an extreme speed. At 13 seconds in the video, it could be seen that a tractor had overturned on the other side of the road. Contrary to Rajdeep’s claims, who tried to portray the police in a bad light, it was seen that the cops immediately rushed to the victim’s rescue. They also attempted to carry his body away, anticipating an explosion in the damaged vehicle.

‘Farmers’ resort to violence and vandalism

The worst fears came alive on Tuesday morning when ‘protestors’ from Punjab unleashed mayhem on the streets of Delhi. In a video shared by news agency ANI, two such protestors were seen laying siege on a police water cannon vehicle in Sanjay Gandhi Transport Nagar in the national Capital. The vehicle was gheraoed by protestors from all sides, who have been marching both on foot as well as tractor from the Singhu border.

In a shocking incident, an anti-farm law protestor was seen brandishing his sword and attempting to inflict severe injuries at police personnel. While the cops used sticks to defend themselves against the onslaught of violence, an aged ‘farmer’ pulled out his sword to attack a police official. Following the intervention of other protestors, the ‘farmer’ was forced to retreat.

In a video uploaded by Sudarshan news, one so-called ‘farmer’ was seen vandalizing a truck. The protestor, wielding a stick in his hand, destroyed the glass pane of a truck that was parked on the road as a mark of protest against the historic farm laws. The so-called protestors were also seen attacking buses.