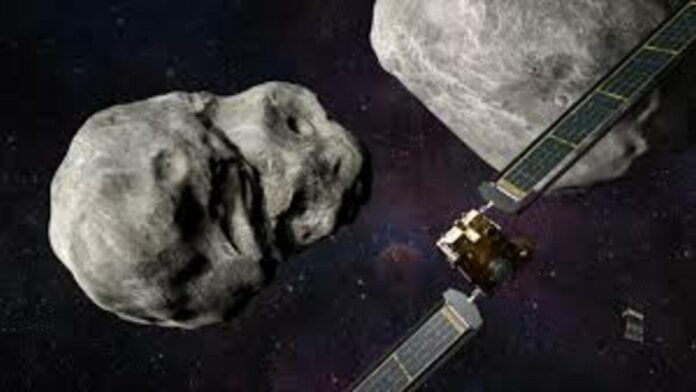 A cosmic collision that was seen all across the earth.

As part of a historic test of humanity’s capacity to safeguard Earth from a potentially catastrophic collision with a space rock, a NASA spacecraft purposefully crashed into an asteroid on Monday.

The DART probe of the organisation, which stands for Double Asteroid Redirection Test, performed the ground-breaking operation on the innocuous and small space asteroid known as Dimorphos, which is located around 6.8 million miles from Earth.

The $325 million mission’s goal was to investigate whether “nudging” an asteroid could change its course, giving researchers a useful hands-on evaluation of planetary security technology.

At 7:14 p.m. ET, the DART spacecraft, which is about the size of a vending machine, collided head-on with Dimorphos while travelling at 14,000 mph.

DART’s camera caught real-time images of Dimorphos growing in size as the spacecraft got closer to the asteroid. The probe transmitted startling details of the space rock’s jagged, uneven surface in the moments before impact.

When the spacecraft’s signal disappeared shortly after sending its final photograph, indicating that the probe had in fact reached its target, cheers broke out.

Bill Nelson, the administrator of NASA, commended the DART team and said that the multinational team of scientists’ work will help humanity defend Earth against impending asteroids.

We are demonstrating that planetary defence is an international effort and that saving the world is highly likely, Nelson added.

NASA may not confirm any adjustments to the space rock’s trajectory for up to a few weeks. The objective is to cut the asteroid’s almost 12-hour orbit down to a few minutes long.

Even a slight alteration in an asteroid’s course in a real-world planetary defence scenario, if it is still far enough away, may prevent a catastrophic collision.

Dimorphos, an asteroid that is 525 feet diameter, revolves around Didymos, a much larger asteroid that is 2,500 feet wide. According to NASA, neither Didymos nor Dimorphos are a threat to Earth.

The DART spacecraft travelled to its target asteroid for ten months after its November launch into space.

The probe wasn’t supposed to make it through the collision. Several minutes after the impact, a small, Italian-built satellite that was sent as part of the operation was to fly within 25 to 50 miles of Dimorphos and take pictures.

Ground-based telescopes will be utilised in the coming days and weeks to observe Dimorphos and measure its orbit. A mission led by the European Space Agency that will launch in 2024 will analyse the asteroid’s impact crater and go more in-depth with Dimorphos and Didymos.

NASA anticipates that the DART collision will reduce Dimorphos’ orbital period around Didymos by up to ten minutes. That comparatively slight change is anticipated to increase with time. If successful, it would show the value of doing such a manoeuvre in the presence of a potentially dangerous asteroid that is millions of miles away.

The DART mission serves as a proof-of-concept for the use of asteroid deflection in planetary defence. Data from the experiment will help NASA understand how the concept might be used in the future in addition to proving whether it works.

It is the responsibility of NASA’s Planetary Defense Coordination Office to look for nearby objects that could endanger the earth. Although scientists have cautioned that only a small portion of smaller near-Earth objects have been discovered, the agency stated that no known asteroid larger than 450 feet across has a serious risk of reaching Earth in the next 100 years.

According to Bruce Betts, chief scientist at the Planetary Society, a nonprofit organisation that conducts research, lobbying, and outreach to support space exploration, the fear of “killing asteroids” may seem unreal, but it is all too real.

The Chicxulub asteroid, estimated to have been 6 to 10 miles wide, crashed into Earth 66 million years ago, causing a sudden mass extinction. This event is the best-known example of a cataclysmic impact. Nearly three-quarters of all plant and animal species that were present on Earth at the time perished in the catastrophe, which also wiped out the dinosaurs.

When a space rock detonated over a remote area of Siberia in 1908, it was the greatest asteroid impact in history. According to NASA, the catastrophe, which became known as the “Tunguska explosion,” destroyed trees on 500,000 acres of virgin forest. There are still unanswered questions regarding the Tunguska disaster, but experts have determined that a space rock between 164 and 262 feet across most likely caused the collision.

Even far tiny space pebbles have the potential to do significant harm.

A space rock the size of a tennis court that was about 65 feet wide flashed through the sky in 2013 above Chelyabinsk, Russia, before exploding in the atmosphere at a distance of around 20 miles.

According to NASA, the explosion generated energy roughly equal to 440,000 tonnes of TNT. Over hundreds of square kilometres, the explosion and its shock wave destroyed trees and broke out windows. Over 1,600 people suffered injuries.

Chelyabinsk was a wake-up call, according to Betts. “After that, people began to take it much more seriously, and the concept of planetary defence became much more widely accepted.”

Betts expressed his hope that the DART mission would help spread the word about the value of planetary defence.

It has the potential to do catastrophic damage, but these things don’t happen very frequently, so it’s planning for an unique kind of calamity, he added. However, if we prepare for it and work hard now, it will pay off and we can actually avert a catastrophic tragedy in the future.