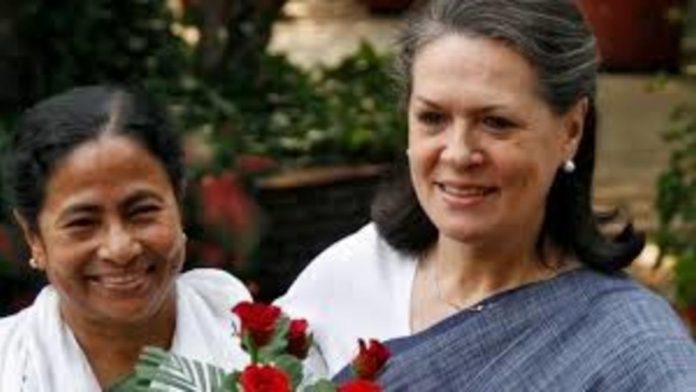 West Bengal Chief Minister Mamata Banerjee who is on her visit to Delhi has met Congress president Sonia Gandhi on Wednesday. Rahul Gandhi was also present during the meeting that was important as the two oppositions met to join hands to fight in 2024 general elections.

It was the first meeting between Ms Banerjee and Sonia Gandhi after they interacted in state assembly elections that were held during March-April this year.

“Sonia ji invited me for a cup of tea and Rahul ji is also there. We discussed Pegasus and the Covid situation in the country. We also discussed the unity of the opposition. It was a very good meeting, positive meeting. To defeat the BJP, everybody needs to come together. Everyone will have to work together,” said Ms Banerjee after the meeting with Sonia Gandhi.

The Bengal CM is on her five days visit to Delhi, where she had met with senior Congress leaders Kamal Nath and Anand Sharma on Tuesday. After meeting Gandhis she also met with Delhi Chief Minister Arvind Kejriwal.

Since her landslide victory in Bengal in May, Mamata Banerjee is turning out to be one of the biggest rival face against BJP for general elections that are due to held in 2024. She has been trying her best to consolidate anti-BJP forces to do so.

It was hard for BJP to digest its defeat in Bengal despite massive campaigning.

It is for the first after her victory the chief minister has enlisted to meet several key persons in her visit to Delhi.

“Poore desh me khela hoga. It’s a continuous process… When general elections come (2024), it will be (Prime Minister Narendra) Modi vs country,” she told media on Wednesday.

“After the parliament session there will be talks, there should be a common platform to work together. I am meeting Sonia Gandhi and Arvind Kejriwal. I spoke to Lalu Prasad Yadav yesterday. We will be talking to all parties,” she said.

On being asked about who could lead an opposition front, she said, “I am not a political astrologer, it depends on the situation.”

The Bengal CM had also said earlier that she was open to any opposition front but any such grouping was not possible without Congress.