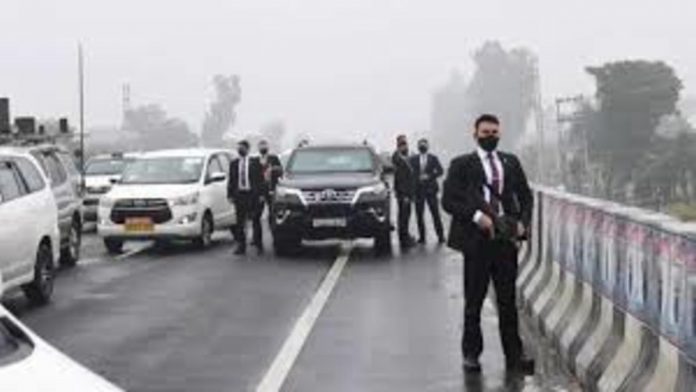 On Prime Minister Narendra Modi’s way to Ferozepur in Punjab a big violation in his security at a flyover has erupted a huge political fight between BJP and Congress on Wednesday. PM Modi was going to address a rally and attend an event at the martyrs’ memorial in Ferozepur when he was stranded over a flyover for about 20 minutes as some protesting farmers blocked the route.

Soon after the incident the BJP has accused the ruling Congress government of Punjab for doing this intentionally to hurt PM Modi. In a sharp attack on Congress, Minister of Women and Child Development, Smriti Irani said, “We know Congress hates Modi, but today they tried to harm the PM of India,’ asserting that the ‘khooni’ intent of the Congress has however failed at the holy land of Punjab.

Doubting the series of events she asked, who informed the farmers about PM’s route. “Who in the Punjab government gave information about the PM’s route to individuals who planted themselves atop the flyover? Video evidence, now publicly available, brings such questions to the fore,” said Mrs Irani.

“It is sad that the PM’s visit to launch development projects worth thousands of crores for Punjab was disrupted… State Police was instructed to prevent people from attending the rally…CM Channi refused to get on phone to either address the matter or solve it,” said JP Nadda in one of his tweets.

However, soon the Punjab CM held a press conference to clear all the allegations as baseless and said that he was about to receive PM Modi at Bhatinda airport but he was unable to present himself there as the chief secretary had tested positive for Covid-19.

“Whatever happened was unfortunate. The Punjab Home Minister had informed me about the protesters and we even tried to pacify them. All security arrangements were made. The Finance Minister was sent to receive PM Modi,” said the Chief Minister.

“The farmers have been agitating peacefully for the last one year. I’m not going to lathi-charge the farmers. We spoke to farmers last night, after which they ended their agitation. Today, suddenly some agitators gathered in Ferozepur district,” he said, adding “I express regret that PM Modi had to return during his visit. We respect our PM. But there was no danger to the Prime Minister’s life.”

Mr Channi even told that PM Modi’s convoy was stopped way before the protests and he was asked to change to route but he refused.

Earlier, it was decided that PM Modi will visit the National Martyrs’ Memorial by helicopter but there was poor visibility after the rain, so it was decided to go by road, and the Ferozepur rally was scheduled later as the road route would take 2 hours more, but later the rally got cancelled.

It is also alleged that the Punjab government failed to send any additional security to make the road movement secure.