‘No Connection With Politics’, Says RSS Chief And Actor Mithun Chakraborty After Their Meet

“I am far away from politics now. I am an actor and want to live like that,” said Mithun Chakraborty. 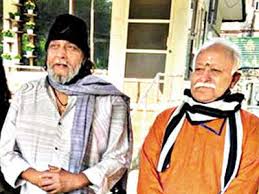 A meeting between Rashtriya Swayamsevak Sangh (RSS) chief Mohan Bhagwat and veteran Bollywood actor and former Member of Parliament Mithun Chakraborty held on Tuesday morning at Chakraborty’s Mumbai residence. The 90 minutes long meeting has sparked so many speculation in politics just ahead of the West Bengal assembly polls which are going to be held in he months of April-May.

Both the RSS Chief and Mithun Chakraborty denied of any political connection with the meeting as Chakraborty said, he is far away from politics now and wants to remain as an actor whereas RSS said, the meeting held because it was pending since last two years.

“The first thing I wanted to say is that I have a spiritual relationship with Bhagwat ji which is also not new. He had once told me that he will come to meet me when he will be in Mumbai. He loves me and my family. Today, he was in the city and a meeting took place. You (media) are trying to connect dots because of West Bengal polls but the meeting has nothing to do with politics,” responded Chakraborty to media over the speculations regarding the meeting.

“I have always fought for the poor section of the society. Whoever will work for the welfare of the poor, I will support them anytime but this time no politics,” he answered to a question of getting an offer to join politics.

“I am far away from politics now. I am an actor and want to live like that,” he added.

Reportedly BJP is in search of getting a Bengali face for the upcoming Bengal assembly polls and as per the speculations Chakraborty is likely to become the face of party.

Mithun Chakraborty was nominated as a Rajya Sabha member by the TMC in 2014 after the Mamata Banerjee came into power but resigned within two years because of his health. In 2015, he was also summoned by Enforcement Directorate for his involvement in Saradha scam.

Chakraborty met the RSS chief in 2019 in Nagpur, which was termed as a ‘courtesy visit’. The actor spent an hour at the RSS headquarters and then visited the Hedgewar memorial.

Western zone in-charge of media relation, RSS Pramod Bapat called the meeting as a ‘courtesy visit. “The meeting was pending for almost two years. Chakraborty wanted the RSS chief to visit his Mumbai residence for a long time. The RSS chief could not do it because of lockdown restrictions that stretched for months. Today’s meeting should not be linked to politics,” said Bapat.

“Bhagwat Ji met Chakraborty in a cordial atmosphere before the Bengal elections. The actor is loved by a wide section of Bengalis not just for his contribution to cinema but also to the nation. He was the country’s highest individual income tax payer for four consecutive years. He returned the money he took from Saradha. That establishes his devotion to the nation. He is a thinking person. It is expected that Mithun will contribute positively to shape the future of Bengal which stands at the crossroads of history right now,” said Jay Prakash Majumdar, Bengal BJP vice-president.

“The meeting shows the desperation of the BJP. Mithun is an actor who has confined himself to Ooty. He has no relevance in Bengal politics now. He was made a Rajya Sabha member by Mamata Banerjee but he quit after facing threats from the Enforcement Directorate,” said Saugata Roy, TMC Lok Sabha member and party spokesperson.

Chakraborty received Rs.1.16 crore In 2015 as the brand ambassador of the Saradha group, which he returned to the Enforcement Directorate.