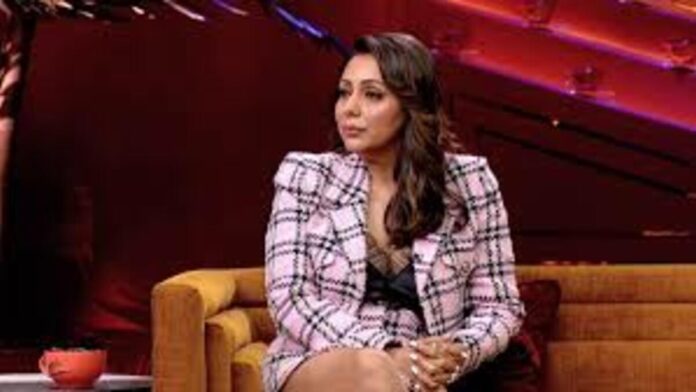 The son of Bollywood superstar Shah Rukh Khan, Aryan Khan, was detained in October of last year in connection with the Mumbai cruise drugs investigation. He spent 26 long days in detention, numerous court appearances, and a lot of drama until the Bombay High Court granted him bail on October 28. Gauri Khan has now reacted to her son’s detention after neither she nor the other family members had previously spoken out about the situation. Bhavana Pandey and Maheep Kapoor, who starred in Fabulous Lives of Bollywood Wives, joined Gauri on the couch in episode 12 of Koffee With Karan 7. On the programme, she discussed the case.

On Koffee With Karan 7, filmmaker and producer Karan indirectly addressed the contentious case, telling Gauri Khan, “I know you as a mother. We are members of the same family, and I am a member of the same family. And, it hasn’t been easy, but Gauri, you have emerged stronger than ever. It has been such a tough ride for him.

Gauri then mentioned the arrest of Aryan Khan for the first time. Nothing could possibly be worse than what we had just experienced, but from where we all stand as a family, I can say that we are in a great place. We feel loved by all of our friends and by so many people we had never met. We feel blessed and we are thankful to everyone who helped us.

Shah Rukh Khan’s kid Aryan Khan is accustomed to being in the public eye. Perhaps not the kinds of headlines he was the subject of throughout October of the previous year. On October 3, 2021, headlines screamed, “Bollywood superstar SRK’s son Aryan Khan arrested in drugs case,” kicking off a cinematic story that concluded in Aryan Khan cooling his feet at Mumbai’s Arthur Road Jail for 22 days. In October 2021, Aryan was detained by the Narcotics Control Bureau (NCB) off a cruise ship off the coast of Mumbai on the suspicion of drug use.

Due to insufficient evidence in the narcotics case for which Aryan Khan was detained for more than 20 days, he was found not guilty of all charges. Once the paperwork was finished, he was finally allowed to leave prison. According to the confessions made by Arbaaz Merchantt, who was also detained in connection with the cruise ship narcotics operation, Aryan Khan did not have any drugs on him and had had requested that Arbaaz not carry any either.

Aryan Khan graduated from the School of Cinematic Arts at the University of Southern California in the United States with a Bachelor’s degree in Fine Arts, Cinematic Arts, and Television Production. He attended school in Mumbai and the United Kingdom. Brother AbRam and sister Suhana are Aryan Khan’s siblings.