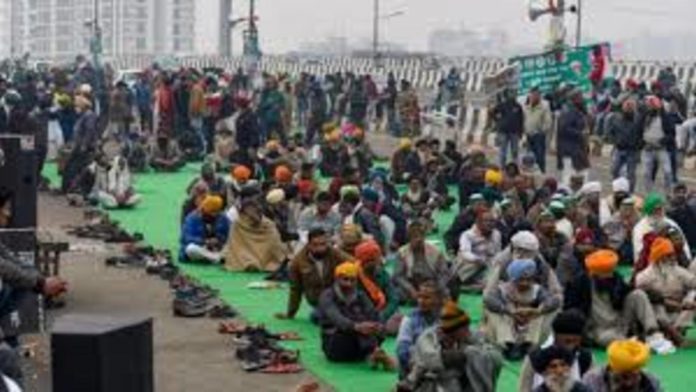 Amid the rain in Delhi adding more to the tough times of the farmers camping at the Delhi borders in their demonstration against the three contentious farm laws, the Samyukt Kisan Morcha (SKM) on Wednesday cautioned the Centre to ” “not test their patience, initiate the dialogue and accept the demands”.

Tens of thousands of farmers have been protesting on the three Delhi borders –Singhu, Tikri and Ghazipur for almost six months now. These farmers are mostly from Punjab, Haryana and Western Uttar Pradesh demanding for repealing of the three laws and a guarantee of Minimum Support Price (MSP).

“… More than 470 farmers have been martyred in the farmers’ movement. Many agitators have had to leave their jobs, education and other work. The government’s attitude meanwhile shows how inhuman and careless it is towards its own citizens, the ”anna daatas”. If the government cares about its farmers and wants their welfare, then it should initiate dialogue with the farmers and accept their demands,” the SKM said in a statement, warning the government to “not test the patience of farmers”.

The government and the farmers have held 11 rounds of talks so far but none of them gave any change in the deadlock which is persistent till date. No side is ready to accept and take a way forward.

In January, the Centre had proposed to delay the enforcement of the three laws for 12-18 months which was denied acceptance by the farmers.

The Supreme Court in resort had stayed the implementation of the laws till further notice and had constituted a committee to resolve the standstill.

The SKM also said that the government which “pretends” to do citizens’ welfare and takes full credit for increasing production or export of any crop to any place then it should also hold itself responsible for every “human loss and other loss” taking place at the Delhi borders.

According to farmers, the rain as an outcome of cyclone Tauktae has caused major “disruption and losses” at the protesting sites.

“It has been a chaotic situation with regard to food and accommodation, due to the rain. Roads and several parts of the protest sites have been filled up with rainwater,” said SKM.

“… For six months now, in all such circumstances, in the absence of any government facilities and support, the protesting farmers themselves are handling such situations,” it asserted.

As per the Centre the new farm laws will free farmers from middlemen that will give farmers opportunity to sell their produce anywhere across the country.

While the farmers say that these laws will end up the “mandi” system which will take away the MSP leaving them at the mercy of big corporates.