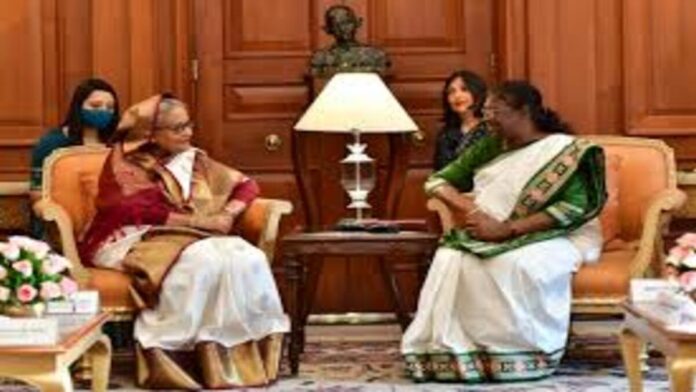 India and Bangladesh signed an interim water sharing agreement for the Kushiyara river on the second day of Bangladesh Prime Minister Sheikh Hasina’s four-day visit to India. This was the first agreement of this kind between the two countries in over 25 years—the Ganga water treaty was signed in 1996. As long as Prime Minister (Narendra) Modi is present, problems between Bangladesh and India would be resolved, according to Hasina. Additionally, the two parties committed to intensify their collaboration in the fight against terrorism and radicalism and to begin talks on a comprehensive trade agreement.

The Bangladeshi prime minister also met with President Droupadi Murmu, who noted that bilateral ties between India and Bangladesh have significantly improved and have been characterised by a spirit of trust and cooperation. On Tuesday in New Delhi, Hasina also had a meeting with Vice President Jagdeep Dhankhar. Rahul Gandhi, the head of the Congress, also met with Hasina.

As the two nations signed an interim water sharing deal for the Kushiyara river, the first such agreement between them in almost 25 years (the Ganga water treaty was signed in 1996), she remarked this in the context of sharing river waters. Additionally, the two parties committed to intensify their collaboration in the fight against terrorism and radicalism and to begin talks on a comprehensive trade agreement.

After their private meeting in New Delhi, Prime Minister Modi and Prime Minister Hasina made the following statement: “Both countries have made amazing progress in a variety of areas. I am reminded of the many unresolved issues that the two nations have settled in a spirit of friendship and cooperation, and I am hopeful that all concerns, including the Teesta water-sharing pact, can be resolved quickly.

Rahul Gandhi, a former leader of the Congress, met Sheikh Hasina, the prime minister of Bangladesh, on Tuesday. The Congress said that the two leaders’ discussions on a variety of topics were productive. The meeting was held in the Chanakyapuri ITC Maurya Hotel.

Following talks with his Indian counterpart Narendra Modi, the Bangladeshi prime minister arrived here on Monday for a four-day visit. The two leaders are expected to sign agreements in several important areas, including river water sharing, trade, and defence.

Hasina, who last visited the nation in 2019, was welcomed by Union Minister Darshana Jardosh at the airport and met with Modi in person on Tuesday in the capital.

Tuesday saw Bangladesh Prime Minister Sheikh Hasina meet with President Droupadi Murmu, who noted that bilateral ties between India and Bangladesh have significantly improved and have been characterised by mutual trust and cooperation.

President Murmu welcomed the leader of Bangladesh at the Rashtrapati Bhavan, noting that the two nations share a common history, language, and culture. He also reaffirmed India’s commitment to being a dependable partner in Bangladesh’s development.

According to a statement released by the Rashtrapati Bhavan, Murmu observed that bilateral ties between India and Bangladesh have greatly improved under the leadership of Prime Ministers Narendra Modi and Hasina.

According to two MoUs signed on Tuesday between the two nations, the Indian Railways would supply training to the Bangladesh Railway’s staff members as well as IT solutions for the computerization of its passenger ticketing and freight operations.

The Mujib Scholarship was made public by Bangladeshi Prime Minister Sheikh Hasina on Tuesday for the children of Indian soldiers who perished in the 1971 Bangladesh Liberation War or suffered severe injuries.

She announced that the awards would be given out on Wednesday. Hasina’s father, Bangabandhu Sheikh Mujibur Rahman, is honoured with a prize bearing his name.

The scholarship would reportedly be awarded to 200 family members of Indian Army troops in total. “The great battle of liberation of Bangladesh in 1971, which marked a turning point in our bilateral relations, was made possible thanks in large part to the government and people of India.

A water sharing deal and six other pacts, including ones on space technology and scientific cooperation, were signed by India and Bangladesh on Tuesday with the intention of strengthening bilateral ties.

Sheikh Hasina, the prime minister of Bangladesh, is travelling to India for four days. Her visit is significant politically in Bangladesh because a general election is expected to take place there in 2019. In the first such agreement between the nations since 1996, the two presidents decided to share the waters of the Kushiyara, a shared river.

According to Indian Prime Minister Narendra Modi, the accord will help southern Assam state in India and the Sylhet district in Bangladesh. However, a highly expected agreement on another river was still in limbo. The Teesta River is a significant transboundary river that originates in the Sikkim state of India and flows through the northern West Bengal state before entering Bangladesh. For decades, Bangladesh has pushed for an agreement on water sharing for this river.