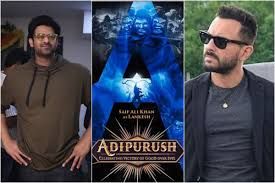 The Baahubali actor Prabhas who makes everyone excited about his projects is now all set to start his shooting for his next movie that is Adipurush. He has recently finished his shooting for his upcoming movie Radhe Shyam which stars him opposite to Pooja Hegde and also announced his another project that is Salaar.

Prabhas announced this on social media that he is starting his shoots for Adipurush from today. He shared a picture with a logo of Adipurush on his social media profile, the picture had a text of ‘Aarambh’ which means the beginning of the shoot. The film is directed by Om Raut and is the adaptation of the greatest holy saga – Ramayana.

The movie will be high on visuals and will not be seen before the visual treatment. Adipurush will be the first Hindi movie starrer of Prabhas and audience are very excited for his adoption of the iconic role of lord Ram which suits his personality well. The movie is said to be released in August 2022.

Speaking about his other project Radhe Shyam, the film stars him opposite Pooja Hegde and has been shot extensively in London. He’s also joining hands with KGF director for Salaar and recently announced the leading lady for the film – Shruti Haasan.