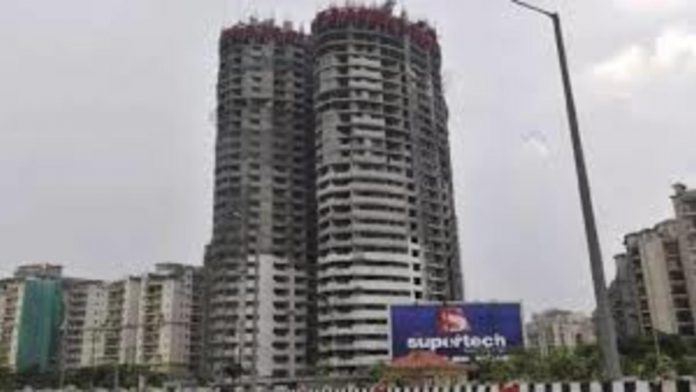 Supertech Builder Noida declared Bankrupt….
An interesting insight into the mysterious links between builders and bankers and the ignorant and helpless common man

I want to bring attention to a disturbing nationwide organised scam that you are a familiar with, but most don’t quite understand the “fraud” part of it . And like some of my answers do, it may ruffle some feathers. But truth must be told. Here it is:

Do these pictures seem familiar to you? Go to the outskirts of any major city in India ,( for example take Noida & Gurgaon which are outskirts of Delhi) , you see miles & miles of semi built structures that just stay dead still & never get completed. All these buildings started in different years, but surprisingly, they all face “financial trouble” just after the basic structure is built. Why don’t we see buildings that stop in-between…..say after 4 floor or 8 floors ? The answer is an organised scam played by the state governments, builders, banks & accounting bodies. This is how it works.

The builders sell you construction linked plan. You assume that its a fair plan as the builder will charge money as & when the construction progresses & it is in builder’s interest to complete the project with speed. Looks fair for all ………. This is where the catch is !!! The so called “construction linked plan” is a sham designed by the agencies listed above, backed fully by the govt & banks. Lets look at the reasons:

What is the scam here ? : The payment plan is designed in a way that you have to pay 90% of the price of flat “at the laying of the top floor of the building”. By this time the builder has spend only 50% of the project cost. Most of the money is needed later in finishing work, electrical wiring, pluming, flooring, paints, lifts, external work, parking, basements,govt permissions for water,sewage, power, etc. You get the logic here. Now the builder is sitting on neat 40% profit (90% – 50%) & all that he is left to “earn” from you is 10%. Why would he spend another 30% money just to recover 10% from you? He stops work right here !!! You’re thinking — he should not because there is a timeline to deliver the project ……………but wait. What if he misses the deadline of delivery? There must be some penalty ? Check the agreement…….ah…. well……Keep searching !! So if developer delays the project, there is no penalty due on his part (or at best its princely sum of Rs 5 per sq feet per month…. which comes to a meager 1% interest !!! ). But if you delay his payment, interest charged is 12% to 18%. Ever heard of one sided agreements ? Which business would not seize this opportunity to “borrow” free money without interest ?

Why did the banks & RBI supported it ? : The befitting supporting actor award here goes to the banks & RBI. They lend “you” the money on “your” credit report.Banks don’t finance the builders for land purchase. They are also very shy on financing the builders for construction(rates are more than 15% to 18%). But wait, consumers can always borrow at 10% & “pay” the builder. So essentially, the consumer is “financing the builder” in the name of “purchasing the apartment”. Oh, did i tell you the best part ……… this money is without any interest for the builder as we see above. So a developer to whom no bank lends money below 18% & that too is seen very risky, can “get easy finance from the same banks” at 0% interest rate, all in the name of consumers!!! While RBI could have set this right just by changing the construction linked payment schedule thru banks, it chose to sit with eyes shut, while the banks & builders continue to fleece customers.

Where did the money go ? : Well, democracy is an expensive way to run governments, specially in developing countries. Every state govt has been enjoying the party with builders & this was a “legal” way to pull huge credit money from the banking system on the books of the “reasonably wealthy middle class” who was sold the idea of buying a house as it “appreciates forever” with tax breaks. Builders diverted money to the political parties to get further favors on land & permits. Seco

ndly, the builder has used this surplus 40% “profits” to buy new land parcels so as to launch more projects & collect even more surplus interest free money. The land prices were assumed to be appreciating forever as more & more money was being pumped out of the banks. The music had to stop some day.

What about the consumers? : The “middle class” consumer will continue to pay his monthly installment to banks, while their money has been siphoned off by the builders, political parties, govt officials & the banks. The apartment that was sold as 40 lacs will eventually cost 60 to 70 lacs considering the delayed possession, not to mention some cases where money is lost forever. You dare not default since you are just a retail consumer. Don’t dare to become an industrialist who can default & live happily ever after. State governments are all hands in, trying to keep existing projects out of RERA. Even if these are included, try fighting the legal battle to get decision from regulator. Then move to district court (yes, district court first) , then high court & finally supreme court. Can u hold till 20 years or rather take the apartment on builder’s terms whenever he feels like offering the same to you ?

Talk of organised banking loot by the government, this is it. If it feels like your story also, your are not alone. But pls never assume that property prices don’t fall.

Copied from FB, unfortunately every word is true.