What Happened During PM Modi’s Security Lapse On January 5 ? 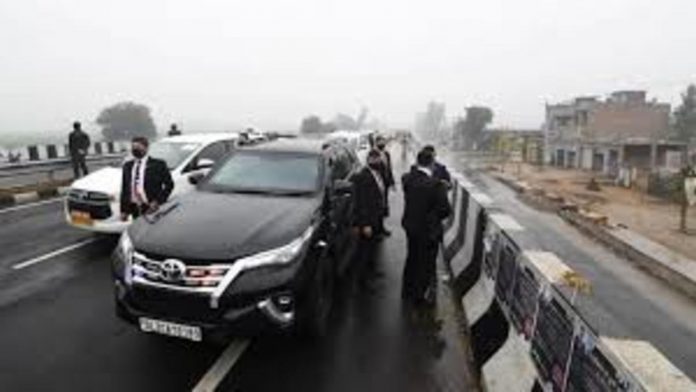 Prime Minister Narendra Modi on January 5, was headed to visit the National Martyr’s Memorial at Hussainiwala and address a rally in Punjab’s Ferozepur when his convoy stalled out on a flyover for about 20 minutes. Protesting farmers had blocked the flyover.

This security break has gathered momentum into a major political heat with the BJP blaming the Congress ruling Punjab government for putting PM Modi’s life in danger while the Congress keeps up with that all fundamental security game plans had been made.

The incident has however now under the Supreme Court- monitored inquiry.

When the Deputy Superintendent of Police Sukhdev Singh was asked, how the state intelligence units had neglected to anticipate what occurred before PM Modi’s scheduled rally, he said that a report was shipped off to the Additional Director General of Police on January 2 in regards to protesters’ arrangement to stop traffic on vital streets and keep BJP workers from arriving at PM Modi’s address.

“Even after the January 2 report, we constantly updated senior police officials that they [protesters] would try to enter the pandal and if stopped by the police, they would stage a dharna on the road,” he further said.

Next, the reporters asked Sukhdev Singh how protesters managed to collect on the road if the police already knew their plans. Sukhdev Singh said.

Then, Sukhdev Singh was asked how protestors figured out how to gather out and about in the event that the police definitely knew their arrangements. “The Baldev Singh Zira group [Bharatiya Kisan Union Krantikari (Phul)] had planned earlier to assemble. I informed the Senior Superintendent of Police. They marched and broke barricades. When they staged the blockade, we informed again,” Singh answered.

He also said, “On January 2, 3 and 4, Additional Director General of Police (Security) Nageshwar Rao had come. I handed over a letter saying roads are being blocked to him.”

On January 5, PM Modi was scheduled to go by helicopter to Ferozepur. In any case, because of terrible climate, he set out by road. It has been discovered that the Special Protection Group plan imparted to state specialists had referenced that PM Modi might need to go by road if there should be an occurrence of terrible climate and the course should be fixed and cleaned all things considered.

Upon the arrival of his visit, intelligence inputs in regards to the fights were being shared by police staff. But the route was not cleared.

DSP Sukhdev Singh said he sent messages in regards to the development of the protesters to the Senior Superintendent of Police. He showed the message in his phone.

“At 11.45 am, the protesters assembled and started moving towards Moga road. This message was delivered and read at 12.07 pm. At 12.20, the Ferozshah barricade was broken They were moving on same route on which Modi was coming. This message was sent at 12.32 pm,” he told.

At 12.45 pm, Sukhdev Singh told the Senior Superintendent regarding Police that 200-225 protesters had obstructed the VVIP course.

At 12.50 pm, Sukhdev Singh got a call from the Senior Superintendent of Police, Bathinda, who inquired as to whether there was a roadblock. “I told him there was indeed a jam and the entire area was blocked. He said, ‘We are doomed’,” said Singh.
PM Modi’s cavalcade arrived at the area at 12.52 pm and turned around at 1.10 pm.

DSP Sukhdev Singh even told that fringe bunch Sikhs for Justice had declared a Rs 1 lakh award for any individual who tossed a shoe at PM Modi during his visit to Punjab. “We had this input on January 4,” he told.

Then the Station House Officer Birbal Singh at the Kulgarhi Station police station in Ferozepur said, “Some people are angry. They had assembled. It’s their place, their right. What can we do? The government didn’t order us to beat them up.”

When asked what the police would have done if they had the orders, he said,

At the point when asked what the police would have done assuming that they had the orders, he said, “If we had orders to disperse them by lathis, tear gas shells or bullets, we could have dispersed them. But elections are coming. We couldn’t use force.”

SHO Birbal Singh additionally asserted that the gathering of protesters was ‘sudden’ and there was lack of communication because of which he didn’t know about the protest.

He alleged that even that the protesters in Ferozepur on January 5 were not farmers but rather “radicals in the garb of farmers”.

In a clear infringement of the Special Protection Group’s convention, a clamoring market close to the flyover where PM Modi’s cavalcade was slowed down on January 5 remained open in spite of thd VVIP’s movement. Inside the market, an illegal alcohol shop was also open.

A shopkeeper Bikir affirmed something similar. He said he was available at the hour of the security pass on January 5 and his shop stayed open all through.

Further, he said that the protesters were all outsiders and not from the region.

The last person who had the information about the security lapse was the sarpanch of the nearby Pyaregaon village. He said that local people were asked by protesters to join to block the road.

The Sarpanch named Nichattar Singh told, “The protesters sent out a message at the gurudwara asking people to assemble. Ten minutes before PM Modi’s arrival, they sought help for farmers who had blocked the road. The crowd was arranged by kisan unions here.”

He also said, “That day, two youths with lathis in hand came running and called everyone.”

There is yet to be uncovered about the issue which will possible be done by the Supreme Court-monitored team soon.