What Abhishek Bachchan Starrer Dasvi Has In It’s Package? Here Is It’s Review 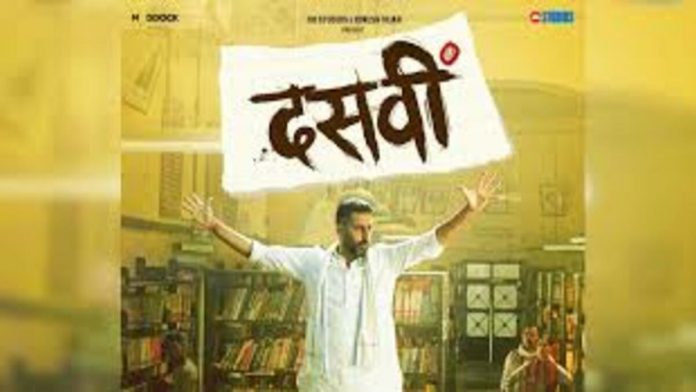 Dasvi is never in with a chance of having its act together, as it blatantly flirts with fatuity and fumbles, falters, and falls flat in the process. It’s a dreadful political parody that sets out to convince the world that education can do what power can’t, and it uses Nelson Mandela to back up its claim. It might have just as easily reverted to APJ Abdul Kalam, as most Hindi films do.

Dasvi’s annoyingly self-conscious earnestness gets in the way of its undoubtedly admirable objective. It takes the job too seriously and, as a result, takes all of the fun out of the exercise. Dasvi, which is currently available on Jio Cinema and Netflix, is amusing for all the wrong reasons. The humorous potential of the subject is squandered by putting a literal spin on a politician’s re-education.

The Abhishek Bachchan-starrer, directed by rookie Tushar Jalota and written by Suresh Nair, Ritesh Shah, and Sandeep Leyzell, provides the lead actor a part to sink his teeth into. He does it with aplomb, but in the lack of a screenplay that can bring the film’s diverse aspects together, he becomes the classic backbencher who makes a lot of noise but doesn’t make much sense.

Bachchan plays Ganga Ram Chaudhary, a brazenly semi-literate upcountry politician who has served as the chief minister of a fictional state for as long as he can remember. He is sure that he was born to rule in whatever capacity he can, and that no one on the horizon can stop him. As a result, he is free to treat his personal secretary Tandon (Chittaranjan Tripathi) with undisguised scorn – “I am an IAS topper,” the obedient official claims.

When a politician is convicted of a fraud and sentenced to prison, the wheels start turning. Vimla Devi, his passive, subservient wife, receives the reins of authority from him (Nimrat Kaur). He is optimistic that he will be released on bond and resume his job soon.

Satpal Tomar (Manu Rishi Chadha), the obedient jail warden, goes to great lengths to provide the ex-CM with all he requires to feel at ease in prison. However, two events occur at the same time, queering the pitch for the man. On a punishment posting, Jyoti Deswal (Yami Gautam Dhar), an uncompromising and intrepid superintendent, arrives to assume charge of the jail. Two, after tasting blood, his own wife develops a passion for the CM’s throne.

The two women are about to teach the political powerhouse a few lessons. Dasvi is about how it turns out, but the film never has a clear picture of a focal point since it takes on far more than it can handle and veers off course. Like Ganga Ram, who is persuaded to assume that all he needs to learn English is to know the difference between active and passive voice, the film suffers from a slew of erroneous assumptions that it struggles to justify.

Ganga Ram, whose schooling ended after Class 8, decides to take the Standard X (dasvi) examination to avoid the arduous labour he is required to do and to keep the sassy Jyoti Deswal from making fun of his inadequate scholastic skills. He believes he has what it takes to complete his school education and grasp English, Hindi, History, Math, Science, Social Sciences, and everything else.

His bold move is supposed to set off a chain of comedic occurrences. It doesn’t do anything like that. In his attempt to catch up with all of the formal knowledge that has passed him by, Dasvi, who is painfully unfunny, beats about the bush just as much as Ganga Ram does.

What exactly does that imply? He meets Mahatma Gandhi, Lala Lajpat Rai, Chandrashekhar Azad, and Subhash Chandra Bose while researching the history of India’s freedom struggle, as well as learning about Bhagat Singh’s accomplishments.

On one occasion, Ganga Ram shouts “Inquilab Zindabad,” but Dasvi isn’t interested in mentioning that the slogan was coined by Maulana Hasrat Mohani, a prominent leftist freedom fighter, or even allowing a certain Pandit Jawaharlal Nehru or the party he led to enter the narrative framework even tangentially. Ganga Ram is helpless against the curse of biassed history!

Ganga Ram learns that “those who fail to learn from history are destined to repeat it” – he paraphrases it as “itihaas se na sikhne waale khud itihaas ban jaate hai” – while he’s at it. “A tiger never changes its stripes,” he learns from the English language. He only finds ways to tangle himself – and the film – up in knots in the repeating cycles that these two aphorisms imprison him in.

In addition, he discovers that, like the protagonist of Taare Zameen Par, he is dyslexic when it comes reading Hindi. But he receives unwavering assistance from fellow detainees and the honourable superintendent of police at every turn. Dasvi, on the other hand, stumbles because the components that may have aided it in finding meaningful answers to its fantastical concerns – the script and some directorial vision – fall short.

Dasvi fails the test since it enters the exam room without the requisite resources. The main protagonists – the politician, his wife, the policewoman, and the Chief of Staff’s personal secretary – are all half-baked personalities with a hazy background. The actors are relegated to a losing battle.

Despite limited opportunities, the supporting characters Ghanti (Arun Kushwah) and Rae Bareili (the name comes from a mispronunciation of “library”), played by Danish Husain, make an impression, but not enough to save this preachy two-hour sermon on the virtues of education from being the dud that it is.