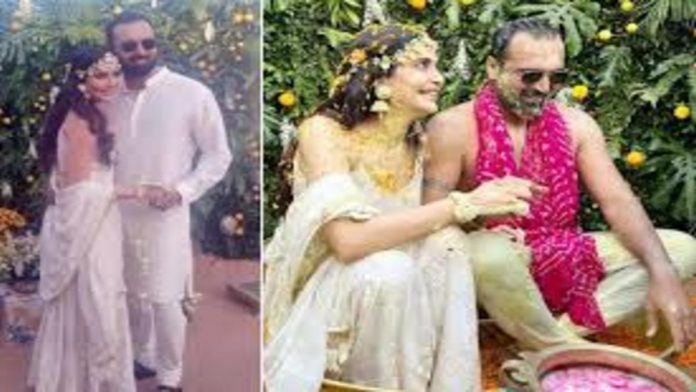 The wedding festivities for TV star Karishma Tanna have begun. On February 5, the actor will tie the knot with businessman Varun Bangera. On Thursday, the couple had their haldi ceremony. Karishma shared a photo of herself getting ready for her pre-wedding event.

Karishma is dressed entirely in white in the photo. She appears to be wearing floral jewellery. “Happiness galore, the smile says it all,” Karishma captioned the photo. As she shared the shot, a slew of celebs flooded her with love. “How gorgeous and beautiful u and it all looks,” stylist Ashley Rebello said of the photo. Heart emoticons were left on the post by Hina Khan, Surbhi Jyoti, Adaa Khan, Aamna Sharif, and Esha Gupta.

On social media, further photographs and videos from the ceremony have also surfaced. For the haldi ceremony, the pair dressed in matching white clothes.

In November of last year, Karishma Tanna and her fiance Varun Bangera got engaged. While the two never spoke about their romance, the news of their engagement was leaked through a friend’s tweet congratulating them. Ekta Kapoor, a producer, verified the news in an Instagram storey alongside the pair. She also wished them a “wonderful future.” “Way to go, Varun and Karishma!” “Best wishes for an amazing future together,” Ekta wrote in her caption.

With Kyunki Saas Bhi Kabhi Bahu Thi, Karishma made her television debut. She then appeared in shows like as Pyaar Ke Do Naam: Ek Raadha, Ek Shyam, Adaalat, BaalVeer, and Qayamat Ki Raat. She also appeared on Bigg Boss 8, Nach Baliye 7, Jhalak Dikhhla Jaa 9, and Khatron Ke Khiladi 10, among other reality shows. She also appeared in the Ranbir Kapoor film Sanju as a cameo.