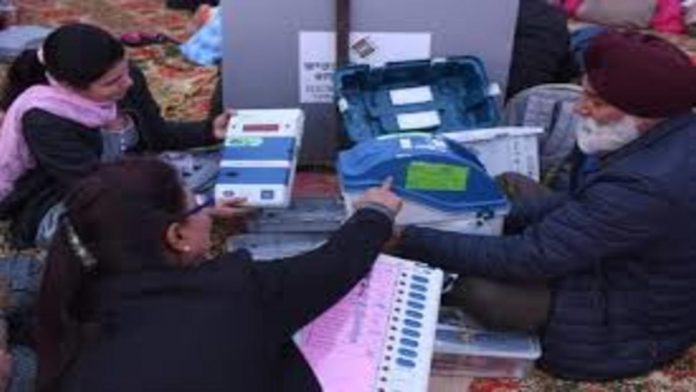 According to the Election Commission of India the voting turnout in Punjab in Sunday polling has record down to 65.31% comparing from 77.36% in 2017. State went under polling on Sunday on 117 assembly seats.

Starting at 8 am the voting continued by 6 pm in the evening. Political parties had been campaigning fiercely until the last minute to the voting in the state.
As per the trend, th voting was slow in the early hours of voting which stood at 57.58% till 3 pm with lower urban participation as compared to the rural.

The state has witnessed a fierce competition in 2022 assembly polls with Congress, BJP-Punjab Lok Congress, AAP and Akal Dal-BSP all trying to prove best. Corruption, employment and drugs were some of the issues raised during the pre-poll campaigning.
These assembly polls were seen very crucial for ruling Congress as it has contested to retain power in the state. In 2017 the party had won 80 out of 117 assembly seats.

Meanwhile, Aam Aadmi Party who has emerged as one of the main contender of Congress in the state has been advertising its ‘Delhi model’ to get voters on its cards . Lok Sabha MP Bhagwant Mann was announced as the Chief Ministerial candidate for Punjab by the AAP Chief Arvind Kejriwal.

However, the AAP had got into a controversy days ahead of the polling day after former AAP leader Kumar Vishawas accused the party of having ties with banned pro-khalistani separatists, which the AAP Chief had straight forwardly denied.