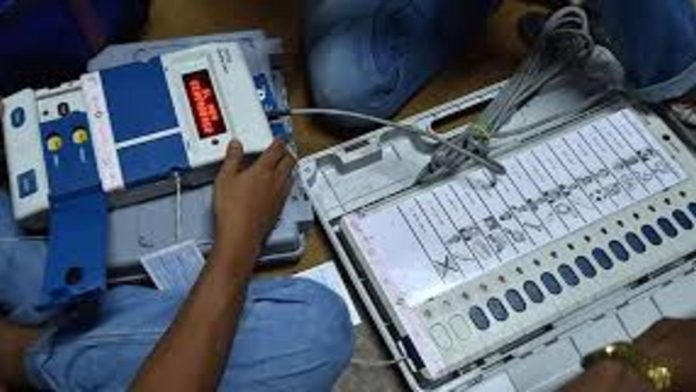 By-elections were held on October 30 in three Lok Sabha and 29 assembly constituencies spanning 13 states and the Union territory of Dadra and Nagar Haveli, and votes will be counted on Tuesday.

Five seats in Assam, four in West Bengal, three each in Madhya Pradesh, Himachal Pradesh, and Meghalaya, two each in Bihar, Karnataka, and Rajasthan, and one seat each in Andhra Pradesh, Haryana, Maharashtra, Mizoram, and Telangana were up for grabs in the assembly by-elections, which saw a high turnout.

Out of the 29 assembly seats, the Bharatiya Janata Party (BJP) won nearly half of them, the Congress nine, and regional parties the remainder.

After the death of incumbent members in Dadra and Nagar Haveli, Himachal Pradesh’s Mandi, and Madhya Pradesh’s Khandwa, bypolls for Lok Sabha seats were held.

Following the death of Independent Lok Sabha member Mohan Delkar in Dadra and Nagar Haveli, the BJP’s Ramswaroop Sharma died in Mandi in March, and a by-election to the Khandwa parliamentary constituency was called after the death of BJP member Nand Kumar Singh Chauhan.

Counting of ballots will also take place in Badvel, Andhra Pradesh, which was formerly held by the YSRC, Deglur, Maharashtra, which was previously held by the Congress, and Tuirial, Mizoram.

Seats in the assembly
The incumbent Bharatiya Janata Party (BJP) has fielded candidates in three Assam seats, leaving the other two to alliance member United People’s Party Liberal (UPPL) (UPPL). The Congress has candidates in all five seats, but its former partners, the All India United Democratic Front (AIUDF) and the Bodoland People’s Front (BPF), are contesting two and one seat, respectively.

The byelections for the Dinhata and Santipur seats in West Bengal are being viewed as a prestige war for the BJP, which is currently dealing with a mass departure of MLAs and top leaders.

Udayan Guha of the Trinamool Congress is attempting to recover the Dinhata seat, which he lost to the BJP in the April elections. The bypoll was held after Nisith Pramanik, now Union minister of state for home affairs, resigned after retaining his Lok Sabha seat. Jagannath Sarkar, a BJP lawmaker from Santipur, has resigned from the Bengal parliament.

The resignation of Indian National Lok Dal (INLD) politician Abhay Chautala as MLA in Haryana forced a by-election to the Ellenabad assembly constituency.

It’s a crucial election for the Chautalas because Abhay Chautala won the Ellenabad bypolls in 2010, when Om Prakash Chautala quit the seat, and then maintained it in 2014. In the 2019 assembly elections, he was the only INLD MLA in the House, and he was re-elected.

Following the deaths of JD MLAs Mewalal Choudhary and Shashi Bhushan Hazari, the assembly seats of Tarapur in Munger and Kusheshwar Sthan in Darbhanga became vacant (U).

There are 30 candidates running for the Huzurabad assembly constituency in Telangana, but the major struggle is between Gellu Srinivas Yadav of the ruling Telangana Rashtriya Samithi (TRS), Eatala Rajender of the opposition BJP, and Venkat Balmoori of the Congress party.

The by-election was called when Eatala Rajender resigned from the state cabinet in June amidst allegations of land grabbing. Rajender, who denied the claims, left the TRS and is now running for the BJP. The outcome is significant for the BJP, which hopes to challenge the ruling TRS in the 2023 assembly elections.

Preeti Shaktawat, Gajendra Shaktawat’s wife, has been handed a ticket by the ruling Congress party in Vallabhnagar to run against BJP politician Himmat Singh Jhala. In Dhariawad, the Congress has fielded Nagraj Meena against the BJP’s Khet Singh Meena.

Both the BJP and the Congress want to win in Rajasthan because the outcome will send a message throughout the state about how the Ashok Gehlot government, which is facing a challenge from the Congress party led by Sachin Pilot, has fared.

Following the death of Sindgi JD(S) member MC Managuli and the BJP’s CM Udasi from Hangal, a byelection had to be called, and it will be the first electoral test for new chief minister Basavaraj Bommai, who replaced BS Yediyurappa.