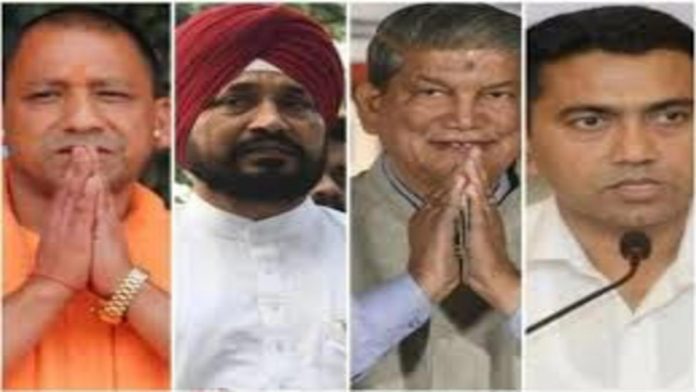 Vote counting for five state assembly elections will take place today at 8 am. Exit polls have however, estimated a landslide victory for BJP in Uttar Pradesh, AAP government formation in Punjab and parallel fight in other three states.

The five states which underwent polling – Uttar Pradesh, Manipur, Punjab, Uttarakhand and Goa. While Congress is facing stiff competition, BJP is hoping for victory in all five states.

UP which is said to be the door to the centre has highest stakes in Parliament with 80 seats. If BJP wins with majority in 403 assembly seats, it will become the first party to have a second consecutive term in more than three decades.

Meanwhile, Samajwadi Party – biggest opposition to ruling BJP in UP led by Akhilesh Yadav has formed a rainbow coalition with other smaller parties to get support from Muslim-Yadav and OBC (Other Backward Classes) voters, which are very vital in eastern and western parts of the state.

The exit polls have predicted a victory for Aam Aadmi Party led by Arvind Kejriwal in Punjab, while Congress has been shifted at number 2 position in 117 assembly seats.

Congress in Punjab had been facing feudal relations for over an year ahead of polls. With rivalry between former Chief Minister Amarinder Singh and cricket-turned-politician Navjot Singh there were internal rivalries going on in the party.

The other parties include former CM Amarinder Singh’s new party Punjab LoK Congress who has joined hands with BJP. The other player is Akali Dal which was separated from its long time partner BJP after wide protests led by farmers over centre’s farm laws.

Goa is also expected to face a tough competition, as BJP is trying hard to retain power in the state as in last elections also despite getting lesser seats than Congress, ruling BJP was able to form it’s government in the state. Both Congress and BJP are ready to form alliance to come in power. BJP is confident that it will receive support from former ally Maharashtrawadi Gomatak Party (MGP), which is an alliance with Trinamool Congress.

Manipur was the second state where the Congress thought it out of battle in 2017 regardless of being the single biggest party, winning 28 of the 60 seats. The BJP, regardless of winning 21 seats, shaped government with the assistance of the National People’s Party and Naga People’s Front. Meghalaya Chief Minister Conrad Sangma’s National People’s Party is likewise in fight this time, challenging 38 seats.

The Congress reaction this time has been early arrangements – hurrying its top leaders to both Goa and Manipur and intently monitoring its flock of candidates. Senior ministers have likewise been dispatched to Uttarakhand, where a tight fight is inevitable.

Many exit polls have anticipated a draped gathering in Uttarakhand. This raises the chance of a major part for Independents and negligible players like AAP, SP, BSP and the UKD in government development. The BJP and Congress are secured straight challenges on 40 to 45 of the 60 seats, while the regional outfits make the battle three-sided on 25-30 seats.