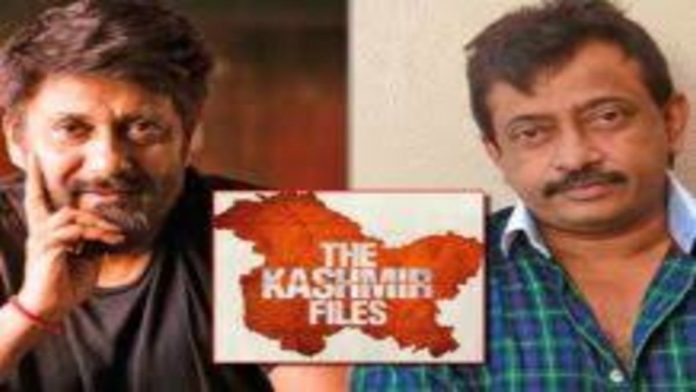 Vivek Agnihotri, the director of The Kashmir Files, has replied to director-producer Ram Gopal Varma’s statement that he ‘hates’ the film. Ram applauded The Kashmir Files, claiming it “broke every rule in the book.” He was reviewing a film for the first time in his life. On his YouTube channel, he posted a video of himself critiquing the film, in which he said that the film demolished everything he had learnt and believed to be true.

“For the first time in my whole career, I am evaluating a film,” Ram Gopal Varma began the video. “I don’t really analyse the film’s theme or the problematic material,” he said, “but I do want to review it as a filmmaker on how it was done.” He lavished praise on the film’s production, storyline, and characters. Anupam Kher’s acting in the film was also complimented by him.

Furthermore, Ram said, “The release of the Kashmir Files violates every norm in the book. There are no stars on it. The director has no desire to impress the audience, which is something that every filmmaker strives for. He wants to make a good impression.” He went on to say that any director or filmmaker planning a new picture “can’t help but study and refer back to Kashmir Files” from now on.

He closed the video by saying, “I despise Kashmir Files because it shattered everything I’d learnt, everything I believed was right, and everything I thought was in at several points. I can’t go back in time, recreate myself, or say to myself, “Oh, this is how it should be created.” No, I’m afraid I won’t be able to. So, whether it’s the director, the acting style, or the way the storey was written, I despise Kashmir Files… I despise them all because you’ve robbed myself, and I’d argue all of the filmmakers, of our individuality… I despise everyone linked with the Kasmir files, but I admire Vivek Agnihotri for bringing it to fruition.”

Sharing his review on Twitter, he wrote, “Don’t take at face value that mainstream Bollywood, Tollywood, etc are ignoring the mega success of #kashmirifiles. The reality is they are taking it more seriously than the audiences, but their silence is because they are s*** scared. Watch my review.”

Sharing a clip from Ram’s YouTube review, Vivek tweeted, “You hate #TheKashmirFiles @RGVzoomin and that’s why I love you.” In barely over a week after its release, the film has amassed a total of 141.25 crore at the box office.

Anupam Kher, Mithun Chakraborty, and Pallavi Joshi star in the film, which was released in theatres on March 11. The Kashmir Files is a documentary on the departure of Kashmiri Pandits from the Kashmir Valley in the 1990s. Several states, including Uttar Pradesh, Tripura, Goa, Haryana, and Uttarakhand, have declared the film tax-free.

watch scute jav free NSFS-137 Posted True Story My Wife Was Turned Best Edition vol.4 SIRO-4944 [Exquisite Tight Pussy] A 21-Year-Old Waitress Older Sister Who Has A Perfect Body Inside And Out With A Tight Man Who Feels Tight Even If You Just Insert One Finger Applied For AV On The Internet → AV Experience Shooting 1915 MIAA-733 Anal M Customs Frequenting Is Found ... I Was Made To Prostrate By My Jealous Girlfriend Until Her Prostate Stupid Alice Oto DVDMS-888 Kimeseku Nipples Iki Incest I Was Made To Remember The Pleasure Of Nipples Every Day By My Brother Who Hates Me, Kozue Fujita SDMUA-048 A female college student who works as a part-time worker in a warehouse, if she finds something wrong during the sorting process. - She looks sober and vulgarly vacuums. - Moreover, she is fine drinking OK.