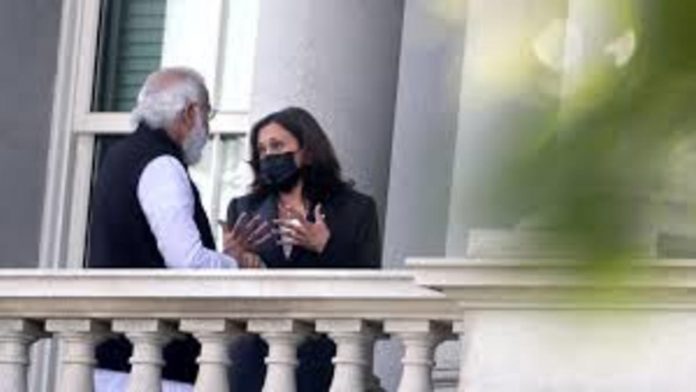 In her first meeting with Prime Minister Narendra Modi, US Vice President Kamala Harris raised Pakistan’s role in terrorism and advised Islamabad to take measures so that it would not jeopardise America and India’s security.

Kamala Harris concurred, according to Foreign Secretary Harsh Vardhan Shringla, saying India has been a victim of terrorism for decades and that there was “a need to rein in, and closely monitor, Pakistan’s support for such terrorist groups”.

The Prime Minister met with Kamala Harris, who has Indian ancestors, for an hour at the White House on Thursday. The talks centred on strengthening the Indo-US strategic alliance as well as global topics of mutual importance, such as threats to democracy, Afghanistan, and the Indo-Pacific.

Ms Harris agreed, according to Mr Shringla, that there were terrorist organisations working in Pakistan.

“She asked Pakistan to take action so that this will not impact on US security and that of India. She agreed with the Prime Minister’s briefing on the fact of cross border terrorism, and the fact that India has been a victim of terrorism for several decades now and on the need to rein in, and closely monitor Pakistan’s support for such terrorist groups,” Mr Shringla said.

Ms. Harris further stated that it is the responsibility of the two countries to preserve democratic ideas and institutions both at home and abroad.

“As democracies around the world are under threat, it is imperative that we defend democratic principles and institutions within our respective countries and around the world. And that we maintain what we must do to strengthen democracies at home and it is incumbent on our nations to of course protect democracies in the best interests of people of our countries,” she said.

PM Modi and Ms Harris spoke over the phone in June, when India was dealing with a large Covid spike.

Recalling their meeting, the Prime Minister called Ms Harris a “inspiration for millions throughout the world,” a “genuine friend,” and someone who spoke “like family,” and that he would never forget it.

“One of our interactions happened when India was battling a very tough wave of COVID-19 infections. I recall your kind words of solidarity that time,” PM Modi said.

“Like a family, the sense of kinship and so warmly, you extended a helping hand, the words that you chose when you spoke to me, I will always remember that, and I’d like to thank you from the bottom of my heart. Like a true friend, you had given a message of cooperation, and were very full of sensitivity and immediately after that we found that the US government, the US corporate sector and the Indian community, all came together to help India.”

“The oldest democracy and the largest democracy…we are indeed natural partners, we have similar values,” he said.

At a time when the US is striving to deepen ties with allies to offset China’s aggressive advances in the region, the Vice President also mentioned the need for a “free and open Indo-Pacific region.”

Taiwan, the Philippines, Brunei, Malaysia, and Vietnam all claim parts of the disputed South China Sea, while China claims practically all of it. In the South China Sea, Beijing has constructed artificial islands and military outposts.

Both leaders spoke in front of reporters from India and the United States while wearing masks.