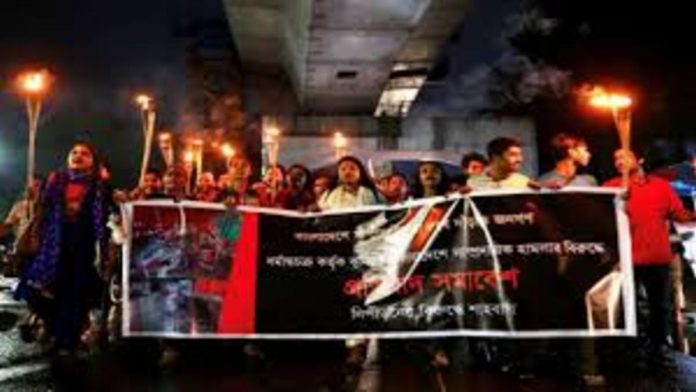 “Freedom of religion or belief is a human right,” the US remarked in response to recent attacks on the Hindu community in Bangladesh.

“Freedom of religion or belief is a human right,” a State Department spokeswoman stated. Everyone should feel comfortable and supported to celebrate important holidays, regardless of their religious membership or belief.”

Meanwhile, Pranesh Halder, a member of the Bangladeshi Hindu minority, has requested the department to “guarantee that the suffering Hindus of Bangladesh receive no additional harm.”

He asked US-based monitoring groups and news organizations to draw attention to the severity of the violence in Bangladesh.

The Bangladeshi Hindu diaspora staged a protest in front of Bangladesh’s embassy here on Sunday to denounce large-scale violence that resulted in the destruction of Hindu homes and temples across Bangladesh during Durga Puja celebrations.

“It’s especially horrifying to see the last remaining Hindus in Noakhali being attacked in this way, 75 years after Islamists demanding the creation of Pakistan killed 12,000 Hindus and forcibly converted 50,000 to Islam in October 1946,” said Utsav Chakrabarti, Executive Director of HinduPACT, a Hindu advocacy group based in the United States.

According to HinduPACT, indigenous Hindus in Bangladesh continue to be the subject of organized hate and discrimination, despite the fact that the minority population has progressively fallen from 28% in the 1940s to 9% currently.

“The new spate of violence underscores the threat that indigenous Hindus continue to confront.” “Hindus continue to be persecuted for their faith 50 years after the Pakistan Army killed roughly 2.8 million of them and forced another 10 million to become homeless and refugees during Bangladesh’s independence fight,” it stated.