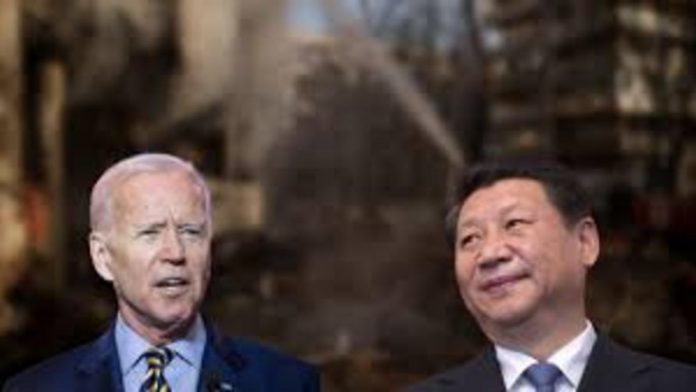 During a phone chat with US President Joe Biden on Friday, Chinese President Xi Jinping emphasised that war is “in no one’s interest.” Biden was attempting to persuade Beijing to join Western criticism of Russia’s invasion of Ukraine.
The White House stated the 1:50-hour phone chat finished at 10:53 a.m. in Washington (1453 GMT).

“State-to-official relations cannot escalate to the point of armed conflicts,” Xi said during the conversation, according to state broadcaster CCTV.

Xi was cited as stating that China and the US should “bear world responsibilities” and that “peace and security are the most valuable jewels of the international community.”

It was unclear if Xi conveyed any direct condemnation of Russian President Vladimir Putin’s aggression towards Ukraine or signalled readiness to help the US-led pressure campaign against the Kremlin.

Biden sought to convince Xi to at least abandon any thought of bailing out Russia during their first phone contact since November.

China should take the initiative “recognise that their future lies in collaboration with the United States, Europe, and other rich and developing nations throughout the globe. It is not in their best interests for them to support Vladimir Putin “Wendy Sherman, the Deputy Secretary of State, said earlier on Friday.

Beijing has so far declined to denounce its authoritarian friend, and Washington is concerned that China would provide financial and military backing to Russia, turning an already volatile transatlantic confrontation into a worldwide conflict.

If that happens, not only may Beijing assist Putin in weathering sanctions and continuing his war, but Western countries would be forced to make the difficult choice of how to respond to the world’s second largest economy, possibly causing market upheaval.

The White House did not say if Biden would threaten China with economic measures during his conversation, but a reaction was expected.

Secretary of State Antony Blinken stated ahead of the conversation that Biden “will make clear that China will bear responsibility for any steps it takes to encourage Russia’s aggression, and we will not hesitate to impose consequences.”

Blinken encouraged China to utilise its “weapons” against Russia.

The Biden-Xi chat occurred after a “significant” seven-hour meeting in Rome this week between US National Security Advisor Jake Sullivan and Yang Jiechi, the Chinese Communist Party’s leading diplomat.

The capacity or inability of Biden and Xi to reach an accord on the emerging mayhem in Europe would resonate broadly against a background of already severe US-Chinese tensions over Taiwan and trade conflicts.

When Xi and Putin met in Beijing for the Winter Olympics in February, just before Putin started his assault on Ukraine, they symbolically solidified their strong relationship.

Since then, Beijing has stood out by refusing to join the worldwide outrage over the invasion, instead siding with Russia in blaming European tensions on the US and NATO. In line with Kremlin talking themes, Chinese officials even refuse to refer to the incursion as a “war.”

China, on the other hand, has sought to be vague, proclaiming support for Ukraine’s sovereignty.

Despite its friendly relations with Moscow, China, the world’s largest exporter, is inextricably linked to the United States and other Western economies. It also wishes to play a global leadership role.

“President Xi is attempting to strike a balance between opposing agendas. He values China’s relationship with Russia, but he does not want to jeopardise China’s Western connections.”