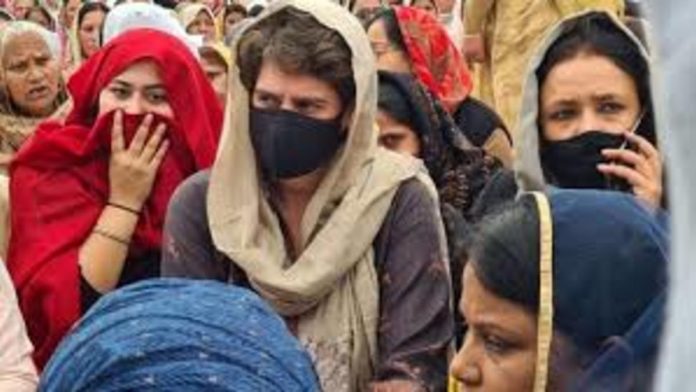 On Monday morning, the Uttar Pradesh Police Department placed Congress politician and Lucknow general secretary Priyanka Gandhi Vadra under house arrest. The leader was on her way to meet with the relatives of four farmers who died after Union Minister of State for Home Ajay Misra’s son Ashish Misra’s convoy allegedly ran over farmers protesting. She was taken to a guest house in the Sitapur area. People are encouraged to travel to the region to show their support, according to a tweet from the UP Congress. There was a large police presence at toll plazas from Lucknow to Lakhimpur Kheri, according to the UP Congress’s Twitter account.

Reacting to the UP Police’s order to place her under house arrest, Priyanka Gandhi Vadra said, “I am not committing a crime by stepping out of the house. I just want to meet the affected families and share their grief. What wrong am I committing? And if I have done something wrong, then you (UP Police) should have an order, a warrant. You (UP Police) are stopping me, my car, but for what reason?”

Meanwhile, Sanjay Singh, the Aam Aadmi Party’s leader, was stopped in Sitapur on his way to Lakhimpur Kheri between Sunday and Monday night. During a vehicle check in the district’s Laharpur sector, he was caught.

When Lakhimpur Kheri became a fortress, however, the provincial armed constabulary (PAC) was stationed outside the house of Samajwadi Party leader Akhilesh Yadav. This happened before he arrived on the scene of the accident. Similarly, Bhupesh Baghel, the Chief Minister of Chhattisgarh, was denied landing permission in Lucknow.

Today, a Trinamool Congress delegation led by Akhilesh Yadav of the Samajwadi Party, Rakesh Tikait of the BKU, Bhupesh Baghel of Chhatisgarh, and Charanjit Singh Channi of Punjab will visit the area.

Minister of state Ajay Mishra Teni responded to reports that his son Ashish Mishra was driving the vehicle that attacked protesting farmers and killed eight people in Lakhimpur Kheri on Sunday, saying that his son was not even present at the time of the incident. He called the whole thing a “conspiracy,” and said his truck, which his driver was driving, had been pelted with stones, forcing it to tumble and two farmers to fall below.

The district magistrate has named the four deceased farmers as Sukhwinder Singh (20), Satnam Singh (20), Hari Singh (35) and Subba Singh (35) (65). All belong from the Bahraich and Kheri areas.