UP CM Taking Jibe At Akhilesh Yadav Says, Lord Krishna Must Have Warned Of SP Defeating In Upcoming Polls 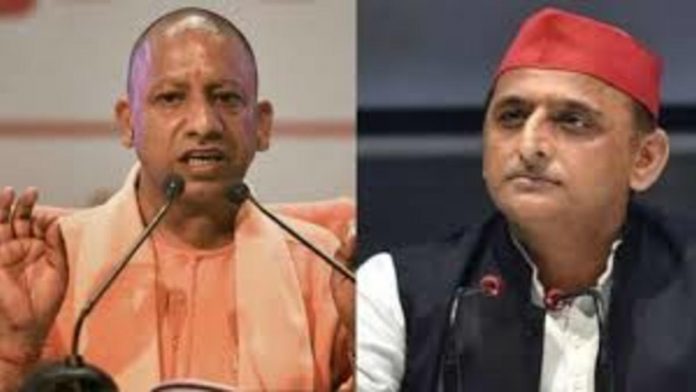 Yogi Adityanath, the Chief Minister of Uttar Pradesh, took a shot at Akhilesh Yadav on Sunday, saying that Lord Krishna must have warned the Samajwadi Party supremo in his dream about his impending defeat in the Uttar Pradesh elections. He also denounced Prime Minister Narendra Modi’s security breakdown in Punjab, calling it a “conspiracy within the country.”

Akhilesh recently said that Lord Krishna appears in his dreams every night to tell him that he will form the government in Uttar Pradesh in the next elections, prompting Adityanath’s remark.

Speaking at an event, Adityanath said, “Many are dreaming of Lord Krishna, but we know very well, what their intentions are. It was under PM Modi’s leadership that we were able to bring in large-scale development in UP. If Lord Krishna would have come in Akhilesh Yadav’s dream, he must have said ‘Beta tu gaya kaam se’ (my son, you’re gone)”. “When Lord Krishna can appear in the dreams of those who installed Kansa’s idol, why can’t Krishna appear in the dreams of his devotees?” he added.

Attacking the Congress, he said, “We have the guts to build Ayodhya and we will also build Mathura. Congress also got a chance but lost the opportunity… In the last 40 years, Congress has not given as many houses as we have given to the people in the last four and a half years.”

“We have used the mandate for nation-building and development. But when SP, BSP and Congress got a mandate in UP, they used it for appeasement and communalism. We are not in the business of giving certificates. When we got the opportunity we made the Ram Mandir, when they got a chance they shot Ram Bhakts,” he said.

When asked from which seat he will fight the UP assembly elections 2022, Adityanath said, “I will fight elections from wherever the party wants me to. My only dream is to help Uttar Pradesh to develop and grow.”

Meanwhile, he also questioned Samajwadi Party over the IT raids and said, “SP was the only party that has an issue with the IT raids. If the concerned person is not associated with SP, then why are they looking so worried?”

“The fight for Uttar Pradesh has gone beyond Brahmins, this fight is between 80 per cent and 20 per cent,” the CM said, adding the BJP will get more than 325 seats in the upcoming Uttar Pradesh elections. “BJP wants a healthy democracy. We are looking at over 325 seats. We are confident that a BJP CM will be taking oath in UP post-March 10,” Adityanath said.

“When the time comes, Hyderabad will also become Bhagyanagar,” Adityanath remarked, responding to AIMIM Chief Asaduddin Owaisi’s remark that “the entire generation of people who wish to rename Hyderabad will end, but even then the city’s name would not change.”

Beginning on February 10, the UP assembly election will be held in seven parts.