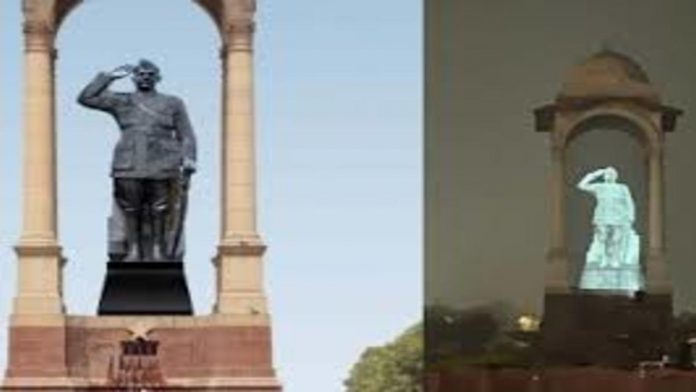 On Twitter, he further stated that this is a message from New India.

“Netaji Subhash Chandra Bose’s presence at India Gate is a long-awaited historical corrective. A leader who opposed imperialism and forced decolonization is being honoured in a suitable manner “In his first tweet, Jaishankar stated.

“This is a message from India in the future. When dealing with the world, we shall be true to ourselves “In a following Twitter message, he added.
On the 125th anniversary of Netaji’s birth, the digital statue was unveiled. A 28-foot high and six-foot broad granite statue of the freedom fighter will eventually replace the 3D hologram.

During the unveiling ceremony, PM Modi addressed the crowd, saying that Bose, who formed India’s first independent government, gave the country the confidence to achieve a sovereign and strong India.

“This statue is a grateful nation’s respect to the hero of freedom, and it will continue to remind our institutions and generations of the importance of national responsibility,” he said.
A 4K projector with 30,000 lumens will power the holographic statue. To generate the illusion of a hologram, a 3D image of Netaji will be projected on a clear holographic screen.

The placement of a granite statue of Netaji under the India Gate canopy, which once held a statue of King George V, honours the INA’s leader as one of India’s foremost independence warriors. The INA was the force that suffered the most loss of life (26,000 out of a total of 90,000) yet never surrendered to the British. Its officers and men were apprehended and tried, but they never signed any surrender papers in front of the British.

According to sources, Prime Minister Modi did not make the decision to place Netaji’s statue on the spur of the moment, but rather after extensive consultations with the culture ministry and those in charge of historical archives.