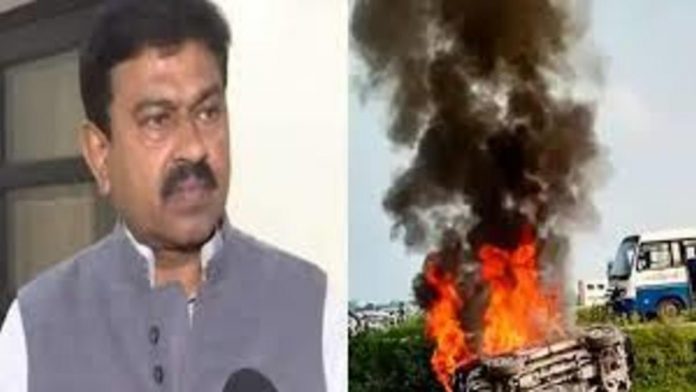 An FIR has been filed against Union Minister of State for Home Ajay Mishra and his son Ashish in connection with the violence in Lakhimpur Kheri on Sunday, which resulted in the deaths of at least eight persons.

Tikait sought Ajay Mishra’s arrest after being questioned about comments made by the Union Minister of State for Home Ajay Mishra in purported recordings that have appeared on social media. Tikait further said that the climate in the region has been vitiated during the last 10 days.

The Union Minister, on the other hand, has denied the charges, claiming that his son was not there at the time of the occurrence. He claimed to have video proof to back up his claim.

Hundreds of farmers will demonstrate at the district collectorate and in every district throughout the country on Monday in protest of the violent conflict in Lakhimpur Kheri on Sunday, which claimed the lives of at least eight people.

In response to the incident, Naresh Tikait, national president of the Bharatiya Kisan Union (BKU), summoned a late-night panchayat in Muzaffarnagar’s Sisauli village, during which it was resolved to conduct a demonstration before the district collectorate on Monday.

“We will first meet the farmers and villagers and discuss the situation with them. The future course of action will be done on the basis of the discussion with the villagers and farmers. Their decision will prevail,” Tikait told reporters at Banbirpur village.

According to reports, eight individuals were killed in the incident, although only four deaths have been officially confirmed so far.

Since the tragedy, the state has been in a condition of anxiety. Everyone is attempting to reach Lakhimpur, from peasant leaders to political figures.

The BKU’s national spokesperson, a non-political farmers’ union, had left western UP on Sunday evening and arrived here early Monday morning, with his friends blaming the delay on several police checks.

“En route to Lakhimpur, we were stopped at multiple places by the UP Police. Somehow we have managed to reach here at Banbirpur village and Tikait ji will now be meeting the farmers here,” BKU’s media in-charge Dharmendra Malik said over the phone at around 5 am.

Meanwhile, mobile internet connections have been banned in areas of the violence-plagued district, where officials have placed restrictions under CrPC sec 144, which forbids gatherings of four or more individuals, according to officials.

The UP Police Department rushed to Twitter early Monday to describe the situation as “unfortunate,” adding that the district administration had confirmed eight casualties so far.

“ADG LO, ACS Agriculture, IG Range & Commissioner are on the spot & situation is under control. Adequate deployment has been done to prevent any untoward incident,” it added.

Priyanka Gandhi Vadra, the Congress general secretary, and other party leaders arrived here early Monday, but claim they were denied access to the victims of the violence that erupted during a farmers’ protest and lost several lives. The Congress party claimed that Priyanka and other officials had been “arrested” by the UP Police in a series of tweets.

Priyanka Gandhi, who is accompanied by party leader Deepender Singh Hooda and others, had to take alternate routes to reach the destination as heavy security was deployed on the main roads amid tension in the violence-hit region.

“We are waiting outside the Banbirpur village. We have been prevented by the police from entering. We have come here to meet the victims of the violence,” Congress national secretary Dheeraj Gurjar said over the phone at 4.30 am.

Priyanka Gandhi’s convoy had been briefly stopped by Uttar Pradesh Police officers in Lucknow on Sunday night, only hours after violence was reported during a rally against anti-farm policies here.

In Gujarat, the first round of assembly elections was held yesterday for 89 seats. One of the important areas that voted was Surat. The...
Read more
POLITICS

Tuesday With only a few days left until Gujarat's first round of voting on December 1, Prime Minister Modi renewed his attack on the...
Read more
- Advertisement -