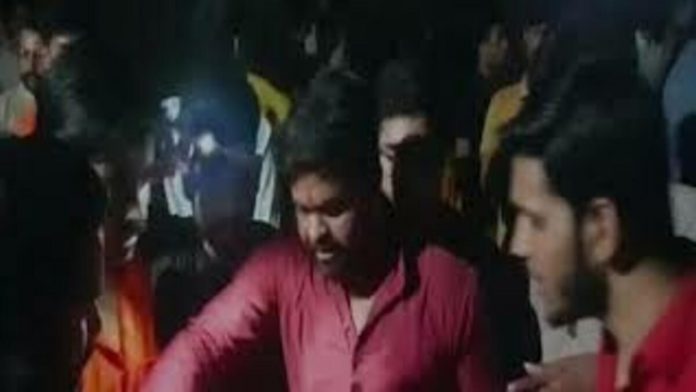 On Sunday afternoon, two groups of students fought on the Jawaharlal Nehru University (JNU) campus in Delhi, purportedly over meat served in the dormitory canteen on Ram Navami.

Six students were injured in the incident, which occurred at 3:30 p.m. at Kaveri hostel.

The Akhil Bharatiya Vidyarthi Parishad (ABVP) members allegedly assaulted the mess secretary and prevented the staff from serving meat dishes in the hostel, according to the Jawaharlal Nehru University Students’ Union (JNUSU).

The ABVP, the student branch of the BJP’s ideological mentor Rashtriya Swayamsevak Sangh, responded by claiming that members of left-wing organisations attempted to prevent a Pooja from being held at the dormitory.

Both sides have accused the other of throwing stones at their members and wounding them.

The cops have been dispatched to the university.

“At this time, there is no violence.” There was a protest, which has since ended. With our team, we’re all positioned here. We’ve come here at the request of the university. According to press reports, Deputy Commissioner of Police (Southwest) Manoj C said, “We are attempting to maintain peace.”

The ABVP allegedly employed “muscle force and goondaism” to create a ruckus, according to the JNUSU.

The student body said in a statement that “they were pressuring and attacking the mess committee to change the supper menu and omit the customary non-vegetarian foods in it for all students.”

“JNU and its hostels are intended to be welcoming spaces for everybody, not just one sector,” the statement continued.

The JNUSU’s charges have been dismissed by the ABVP.

“On the auspicious day of Ram Navami, several common students organised a pooja and havan programme at Kaveri hostel around 3:30 PM.

“A huge number of JNU common students attended this puja.” Leftists arrived to object to, obstruct, and prevent the pooja from taking place. “They have generated a bogus fuss over the topic of the ‘Right to Food’ (Non-Vegetarian Food),” they claimed.

A few students are still demonstrating in the area surrounding the university.

“Earlier today, a statement on social media went viral stating that ABVP members are not allowing non-veg food on campus. On weekends, the mess frequently prepares non-vegetarian dishes. ABVP members, on the other hand, refused to allow this meal to be produced,” JNU student Sarika told the news agency.