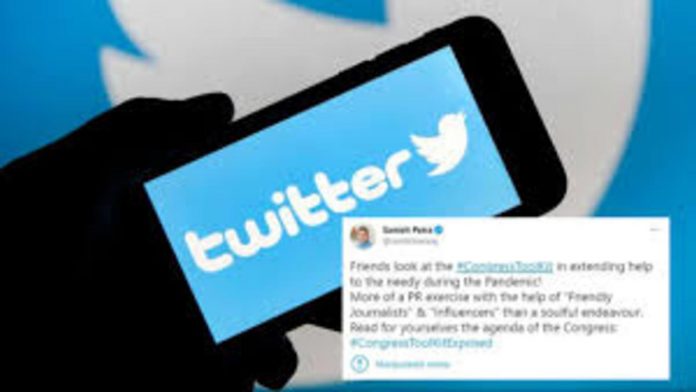 Soon after the Congress filed a complaint against the BJP leaders with Twitter over an alleged “toolkit” the microblogging site has attached a ‘manipulated media’ warning on the ‘toolkit that was posted by the BJP national spokesperson Sambit Patra.

Sambit Patra had on May 18 posted a tweet that contained screenshots of an alleged document shared between Congress leaders which he claimed that it was ‘toolkit’ to defame Prime Minister Narendra Modi for his handling of Covid-19 pandemic.

The tweet shared by Patra claimed that Congress was circulating a document that was advising the Congress leaders on how to defame PM Modi for his handling of the pandemic.

“Friends look at the #CongressToolKit in extending help to the needy during the Pandemic! More of a PR exercise with the help of “Friendly Journalists” & “Influencers” than a soulful endeavour. Read for yourselves the agenda of the Congress,” his tweet read.

The BJP spokesperson also alleged that the ‘toolkit’ on Covid-19 also aimed to help foreign media to come up with anti-India stories. Now after the Congress’s complaint the tweet now follows a ‘manipulated media’ warning to the users who tries to forward, share, like or retweet the post.

The Twitter’s policy section on synthetic and manipulated media policy reads, ‘we may label tweets that include media (videos, audio, and images) that have been deceptively altered or fabricated. In addition, you may not share deceptively altered media on Twitter in ways that mislead or deceive people about the media’s authenticity where threats to physical safety or other serious harm may result’.