Trouble In Keeping Up With Amar Jawan Jyoti, To Be converged With National War Memorial’s Torch 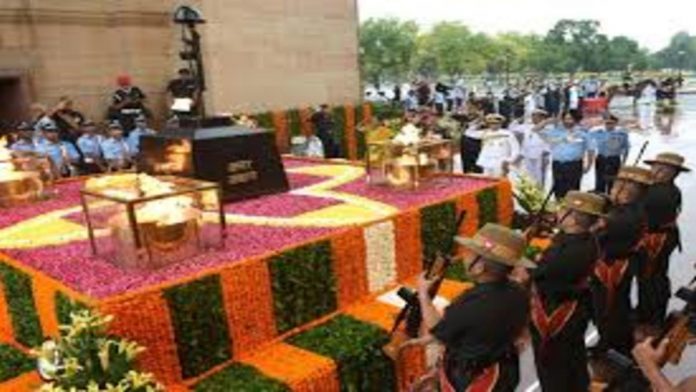 The eternal flame of Amar Jyoti at India Gate lawns will be extinguished forever after burning continuously for 50 years. The torch will now be converged with the National War Memorial’s torch at a program today, a couple of days before Republic Day celebration.

The program which is scheduled to start ar 3:30 pm will welcome Integrated Defence Staff chief, Marshal Balabadhra Radha Krishna, said officials.
According to the sources, the decision was taken after it was observed that keeping up with the flames was turning increasingly difficult.

It has likewise been contended that since the National War Memorial has effectively built for the martyrs of the country, why a different flame ought to be lit at the India Gate, said sources from the armed forces.

The National War Memorial has all the names of Indian defence personnel who lost their lives from 1947-48 war with Pakistan to the clash at Galwan valley.

The names of those troops who lost their lives to counter terrorism are also inscribed at the National War Memorial.

There is a flame at War Memorial positioned beneath the central 15.5 m obelisk. There are four concentric circles – the “Amar Chakra”, “Veerta Chakra”, “Tyag Chakra” and the “Rakshak Chakra”, where the names of 25,942 soldiers are inscribed on rock tablets in golden letters.

The War Memorial also incorporates six bronze murals portraying the renowned fights fought by the Indian Army, Air Force and the Indian Navy in a covered valley in the Veerta Chakra.Pakistan

The India Gate was built by the British government to pay tributes to the troops of the British Indian Army who lost their lives in the first World War between 1914 and 1921. In 1972, the Amar Jawan Jyoti was lit in memory of the Indian fighters who died in the 1971 fight with Pakistan.