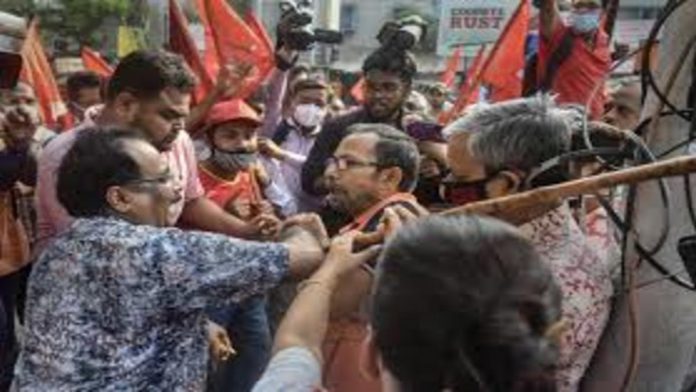 A partial disruption in banking and transport services was seen as two day ‘Bharat Bandh’ kicked off on Monday. This is the first big protest after the result of five assembly state elections.

A joint platform of 10 trade unions have called the ‘Bharat Bandh’ to protest against the “anti-worker”, “anti-farmer” policies of Modi government.
The states where the where the response of ‘Bharat Bandh’ was felt include Delhi, Haryana, Punjab, Odisha, Andhra Pradesh, Kerala among others as banking and transport were partially hit.

In Bengal the people backed by Left blocked railway tracks and also came out on streets to protest. The Left criticised Chief Minister Mamata Banerjee for not supporting the protest against the centre.

The protesters even vandalized government buses in Bengal, mainly in Cooch Behar district, said the Police. CM Mamata Banerjee, who is on four-day tour in North Bengal asked Police to register FIRs.

Haryana commuters, including students, bore the brunt of the strike on day 1 as state-run buses remained off-roads. Transport services were impacted in Karnal, Panipat, Kurukshetra, Sirsa, Fatehabad, Rohtak, Ambala, Yamunanagar and Kaithal districts. Over 100 workers of the Municipal Corporation of Gurugram (MCG) took part in a protest in Gurgaon near Delhi.

People including students in Haryana, endured the look of the strike on day 1 as state-run transports remained off. Transport facilities were affected in Kurukshetra, Karnal, Fatehabad, Panipat, Rohtak, Sirsa, Kaithal areas, Ambala and Yamunanagar. More than 100 workers from the Municipal Corporation of Gurugram (MCG) also took part in the protest.

The ‘Bharat Bandh’ was called after the interest rates were slashed from the Provident Fund that drew major criticism from the workers. The other issues for which the protest is called upon include rising fuel prices and privatisation of central public sector.
The independent sectoral federations and workers’ associations are also part of the protesters along with the joint platform of 10 trade unions.

As per the trade unions, workers from coal mining areas of Madhya Pradesh, Chhattisgarh and Jharkhand also took part in the two day strike.