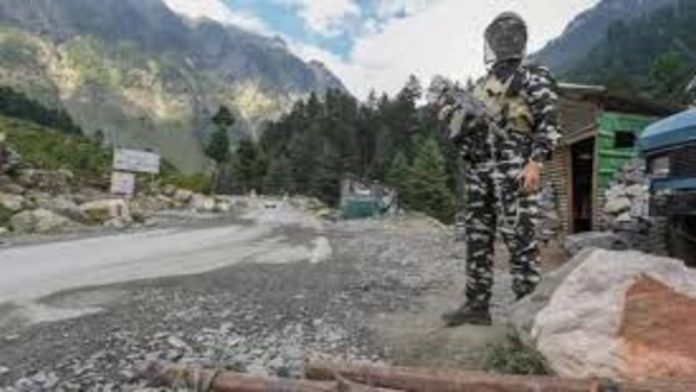 A terrorist group on Thursday opened firing on an Area Domination Patrol (ADP) party of the Army and Jammu and Kashmir Police in Cherdari of Baramulla prompting serious gunfight.

However, one terrorist have been killed after the security forces identified him. The police has recovered a pistol, one Pakistan-made grenade and a loaded magazine from the dead terrorist.

“Killed terrorist is hybrid type, identified as Javed Ah Wani of Kulgam district and he has assisted terrorist Gulzar (who was killed on October 20) in the killing of 2 labourers from Bihar in Wanpoh. He was on mission to target one shopkeeper in Baramulla,” said IGP Kashmir Vijay Kumar.

In the previous week, the Indian forces were able to kill four militants who were involved in the civilian killings in the Kashmir valley. Among the four militants, two were the commanders of Lashkar-e-Taiba (LeT).

In the killings of last week, two labourers from Bihar were killed inside their accomodation in Kulgam district, which took the death tally of civilian killings to 11 in a month.

In a strengthening move Defence Minister Rajnath Singh will today take part in the induction ceremony of indigenous light combat helicopters (LCH) for the...
Read more
In Focus

Prime Minister Narendra Modi at an event will launch the 5G services in India today. Currently, the services will be launched in selected cities...
Read more
In Focus

The Congress is running for its presidential election after 22 years, in which no one from Gandhi family is contesting but according to the...
Read more
In Focus

As the party presidential election coming close, the race is getting bigger for the Congress top post everyday. It is the first election in...
Read more
- Advertisement -