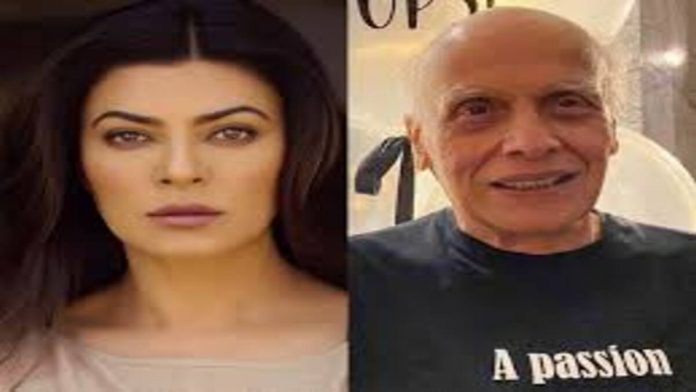 Sushmita Sen, a former beauty queen who made the transition to acting, remembered an encounter she had with Mahesh Bhatt on the set of her first movie, Dastak. Sushmita was requested to portray a fictionalized version of herself in the movie after the director persuaded her to enter the cinema industry following her 1994 Miss Universe victory.

Sushmita said that Mahesh Bhatt reprimanded her in front of the entire cast and crew, causing her to storm out in rage, in an interview with actor-turned-author Twinkle Khanna. But he then suggested to her that everything was a ruse to elicit a performance out of her.

She recalled how Bhatt called her and requested her to play “Sushmita Sen in a movie,” which is how she came to be cast in the movie. When he said, “When did I say you’re a fantastic actor? “, Sushmita was shocked because she had no acting experience (or goals) whatsoever. But I make a great director.

“I’m doing this mahurat shot, where I yank out my earring and toss it at someone, and I’m doing it so terribly I can’t even begin to tell you,” Sushmita added, laughing at his assurance. I’ll give the director credit for being fearless because he openly attacked me in front of 20 production helpers and 40 members of the media.

“And I started crying,” she continued. “Kya leke aaye ho?” he asked. She can’t act to save her life when she’s playing Miss Universe in front of the camera. I consequently became quite irate and began to leave the set. He attempted to grab my hand, but I yelled at him, “No, you don’t talk to me like that,” and I snapped at him. He grabbed my hand once more as I started to leave and whispered, “That’s rage, go back and deliver it (on camera).”

Sushmita put on such a passionate performance that when taking an earring out for the moment, she ended up tearing her ear. She didn’t specify whether Bhatt’s strategy had always been this. Many male filmmakers have faced criticism over the years for creating hostile work environments in the name of creativity. Twinkle noted that in the 1990s, it was more common for directors to yell at women on set rather than the male actors.