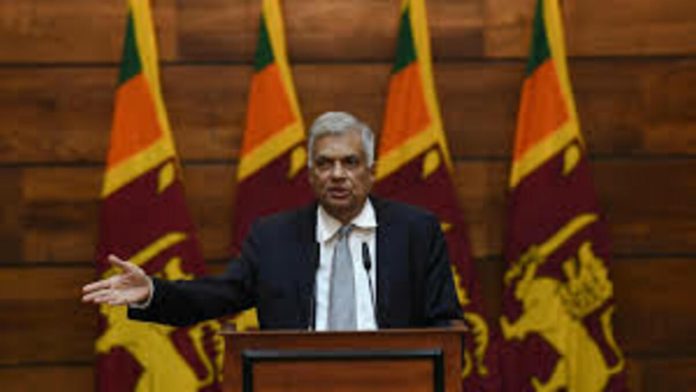 Sri Lanka’s new administration intends to sell the national airline to reduce losses as part of its efforts to stabilise the country’s finances, despite the fact that the government is compelled to print money to pay workers.

Prime Minister Ranil Wickremesinghe stated in a televised address to the nation Monday that the new administration intends to privatise Sri Lankan Airlines. He stated the carrier lost 45 billion rupees ($124 million) in the fiscal year ending March 2021, just days before the country’s foreign debt is slated to default.

“This loss should not be borne by the lowest of the poor who have never stepped foot on an aeroplane,” Wickremesinghe added.

Wickremesinghe said he was compelled to generate money to pay salaries less than a week into the position, putting pressure on the country’s currency. Wickremesinghe said the country only has one day’s worth of gasoline and that the government is seeking to obtain dollars on the open market to pay for three ships carrying crude oil and furnace oil that are anchored in Sri Lankan waters.

“These are going to be the most difficult months of our lives,” Wickremesinghe predicted. “To find solutions to the current dilemma, we must quickly organise a national assembly or political body with involvement from all political parties.”

President Gotabaya Rajapaksa’s “development” budget, which helped fuel Asia’s fastest inflation rate, will be replaced by a new “relief” budget, according to the premier. Wickremesinghe stated the cabinet will propose to parliament that the treasury bill issuance cap be increased from 3 trillion rupees to 4 trillion rupees, projecting a budget deficit of 13% of GDP for the year ending December 2022.

Following violent battles between government supporters and demonstrators demanding Rajapaksa’s resignation, Wickremesinghe was appointed last week. He has failed to name a finance minister to head bailout talks with the IMF, and is seeking bridge financing from countries like as India and China. In the absence of a full cabinet, it’s uncertain whether the government will receive the funds.

The grace period on two unpaid foreign debts expires on Wednesday, sending Sri Lanka into default, the latest blow to a country beset by economic suffering and social turmoil.

On Monday, the country’s dollar bonds edged higher, although they remained in troubled territory. According to JPMorgan Chase & Co. data, the extra yield investors seek to hold sovereign notes over US Treasuries has shrunk 22 basis points to 37.29 percentage points.

In 2010, the Colombo government purchased a share in Sri Lankan Airlines from Emirates of Dubai. According to FlightRadar24, the national airline flies to destinations in Europe, the Middle East, as well as South and Southeast Asia, with a fleet of 25 Airbus SE jets.

“Within the next couple of days,” $75 million is required.

“There is a chance that inflation will rise even higher”; the government can no longer afford to subsidise gasoline and diesel.