Sonam And Anand Ahuja Poses For Paparazzi After Pregnancy Announcement 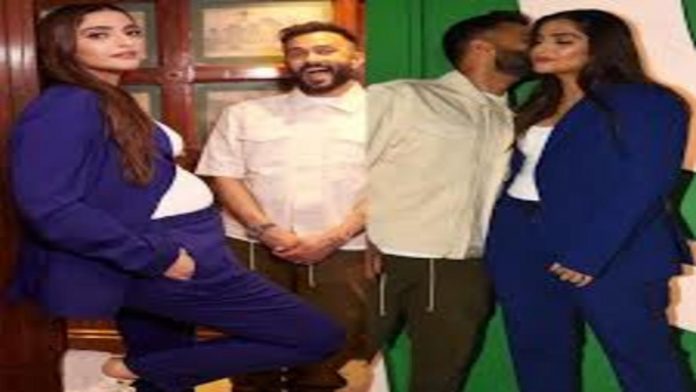 Since Sonam Kapoor revealed her pregnancy, she and her businessman husband Anand Ahuja have made their first public appearance. On Wednesday, two days after she announced her pregnancy on Instagram, the pair posed for the photographers at an event.

Sonam and Anand, who are now in Mumbai, were seen in the city’s outskirts to celebrate the inauguration of the Vegnonveg shop. Sonam was dressed in a blue pant suit and traditional white shoes. Anand was dressed in an olive joggers and a beige sweater. Fans responded on the video with heart-eyed emojis, with one adding, “very sweet.” “Wow congrats,” said another. “My favourite,” wrote a third.

Sonam and Anand Ahuja were joined by Sonam’s father, Anil Kapoor, for the event. Harshvardhan Kapoor, Sonam’s brother and an actor, was also present at the ceremony. Patralekha, Saqib Saleem, and Huma Qureshi were among the prominent celebs that attended the event.

A maternity pictorial was used to announce Sonam’s pregnancy. She added that she was happy to share the photos “There are four hands. To provide you with the finest possible care. There are two hearts. Every step of the way, that will beat in time with yours. There is just one family. Who is going to love and support you? We’re looking forward to seeing you.”

Several members of Sonam’s family and celebrities congratulated her on the news. “Wohoooooooo very thrilled for you both,” Kareena Kapoor tweeted. “I can’t wait for the babies to come out and play.” “Such amazing news!!!” Dia Mirza wrote. I’m overjoyed for you.” “Congratulations,” wrote Ananya Pandey.

In an Instagram post, Anil Kapoor congratulated his daughter, saying, “Now preparing for the most thrilling position of my life – grandpa.” Our lives will never be the same, and for that I am eternally thankful!”

Sonam was recently seen in Dulquer Salmaan’s 2019 film The Zoya Factor, in which she co-starred. She also appeared in Anil Kapoor and Anurag Kashyap’s AK versus AK, a Netflix film released in 2020.