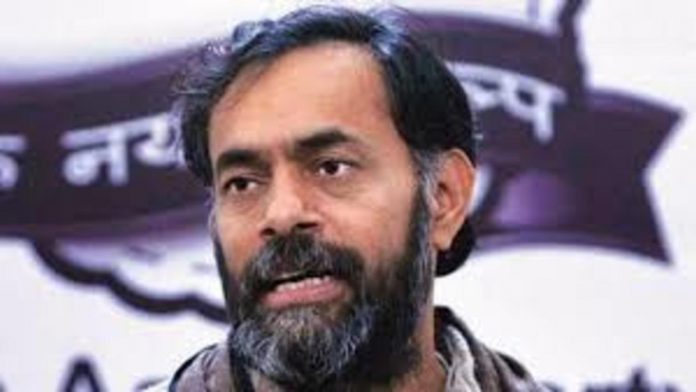 On Thursday, the Samyukta Kisan Morcha (SKM) — the apex body of farmers’ organisations opposing the three farm laws — suspended social activist Yogendra Yadav from the farmers’ body for one month.

WHY WAS YOGENDRA YADAV SUSPENDED?
The demand for Yadav’s suspension was pressed by several farmers’ unions because he had met the bereaved families of the Bharatiya Janata Party (BJP) workers who were killed during the Lakhimpur violence.

According to sources, during the SKM meeting on October 21, Yogendra Yadav was first asked to apologise for the act of meeting the bereaved families of the BJP workers killed during the Lakhimpur violence in which four farmers had died.

When Yogendra Yadav refused to tender his apology, the SKM decided to suspend him. As per sources, the demand for his suspension was aggressively pushed by Punjab-based farmers’ unions.

‘CAN’T DISCRIMINATE AMONG BEREAVED FAMILIES’
As per sources, during the meeting, Yogendra Yadav did apologise for not consulting his colleagues before meeting the families of the deceased BJP workers in Lakhimpur Kheri.

“But he didn’t apologise for the act of meeting the families of the deceased BJP workers Yogendra Yadav in principle believes he did nothing wrong by extending his condolences to those in grief. You can’t discriminate amongst the bereaved families,” sources close to Yogendra Yadav told India Today.

Yogendra Yadav has refused to comment on his suspension from the SKM.

Yogendra Yadav, on his way back after meeting the families of farmers who were killed during the Lakhimpur violence, had met the family members of the deceased BJP workers. The act irked many supporters of the ongoing farmers’ agitation.

Yogendra Yadav was among the very few SKM leaders who had vocally extended their condolences to the families of the BJP workers killed during the Lakhimpur violence.

LAKHIMPUR KHERI INCIDENT
On October 3, eight people died in Uttar Pradesh’s Lakhimpur Kheri. A convoy of vehicles belonging to Union minister Ajay Misra’s son Ashish allegedly ran over protesting farmers, killing four of them. In the violence that followed, another four people — two BJP workers, a driver and a journalist — lost their lives.