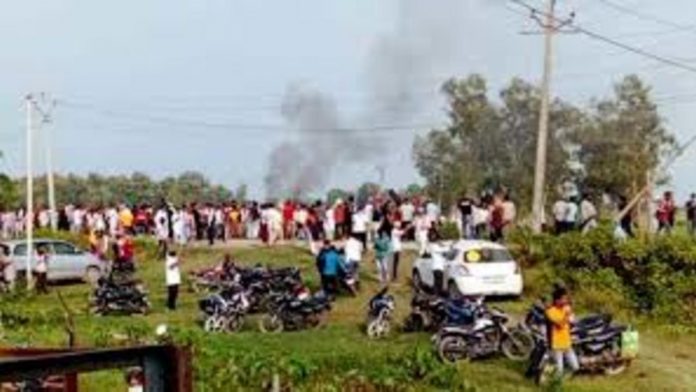 On Sunday, eight people were killed in Lakhimpur Kheri, including four farmers, in the deadliest clash since the farmers’ protests against the Centre’s agri laws began last year. The son of Union minister Ajay Misra, Ashish Misra, was named in the UP Police’s FIR in the Lakhimpur Kheri tragedy. According to the FIR, Ashish alias Monu was in the car that mowed down farmers protesting. Meanwhile, the Samyukt Kisan Morcha has requested Ashish Mishra’s arrest in connection with the event. Meanwhile, when staging rallies or attempting to visit the violence-plagued district, some major officials, including Congress leader Priyanka Gandhi and Samajwadi Party chairman Akhilesh Yadav, were detained by police. Priyanka Gandhi Vadra, who was arrested on Monday for breaching prohibitory orders to visit Lakhimpur Kheri, issued a statement condemning her imprisonment as “illegal.”

Rahul Gandhi’s visit to Lakhimpur began shortly after he held a press conference on Wednesday. Rahul Gandhi, Bhupesh Baghel, and Charanjit Channi, all members of the Congress, have flown to Lucknow, Uttar Pradesh, to meet with families of farmers killed in the Lakhimpur Kheri violence.

Sachin Pilot, the former Deputy Chief Minister of Rajasthan, had his convoy halted at Indirapuram in Uttar Pradesh. He was travelling to Lakhimpur. Sachin Pilot arrived in Delhi on Wednesday morning and immediately drove to Sitapur in Uttar Pradesh, according to sources close to him.

Arvind Kejriwal, the Delhi Chief Minister, questioned why the suspects in the Lakhimpur violence event have not yet been apprehended. In a speech to Prime Minister Modi, Kejriwal said, “The nation is watching on social media how a car mowed down farmers. The car has also trampled the entire government…”

“On one side, the government is celebrating 75 years of Independence and on the other side, political leaders are being stopped from visiting Lakhimpur Kheri. What’s the reason behind it? PM ji, the country wants the accused to be arrested& the Union minister be removed from the post,” Kejriwal said.