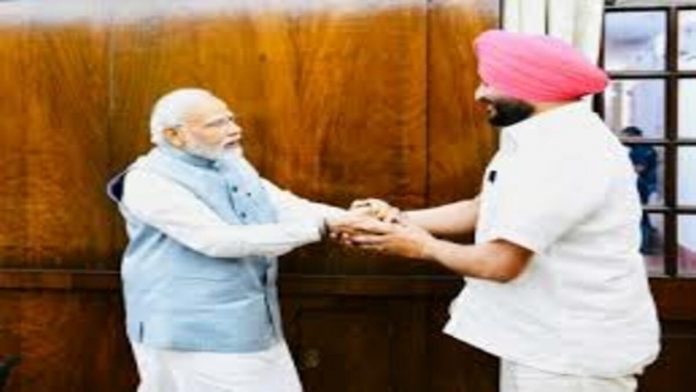 On Monday, Ravneet Singh Bittu, the Congress’s senior leader from Ludhiana, met with Prime Minister Narendra Modi in Delhi, in what is being interpreted as a sign that he will switch sides. Mr Bittu stated that the purpose of the meeting was to discuss “Punjab issues.” He is not joining the BJP, according to sources close to him, and the Prime Minister wants him to fight alongside the ruling Aam Aadmi Party in Punjab.

Mr Bittu, who has become known as the party’s Hindu face since his grandfather, former Chief Minister Beant Singh, was assassinated in 1995, had posted photos from the meeting.

The state Congress, which has remained silent since its shocking defeat in the recently concluded assembly elections to the Aam Aadmi Party, has yet to comment on the meeting. In Delhi, party leaders said that too much should not be read into the meeting.

Since the election results were announced last month, the Congress has been in a state of disarray in Punjab.

In the elections, Arvind Kejriwal’s AAP won by a landslide, relegating the Congress, the BJP, and the local Akali Dal to the margins. Only 18 seats were won by the Congress, down from 77 seats in 2017.

Navjot Sidhu, the state Congress chief, was forced to resign shortly after the blame game began within the party and the G23 (leaders critical of the Gandhis) resurfaced. His successor has not yet been named.

In the assembly, no one has been named the leader of the opposition.

Mr Bittu, a Ludhiana MP who is close to Rahul Gandhi, has been furious with the Congress for a long time because he was passed over for the positions of Chief Minister and State President.

Mr Sidhu, as well as former Chief Ministers Charanjeet Singh Channi and Amarinder Singh, have been criticised by the 46-year-old.