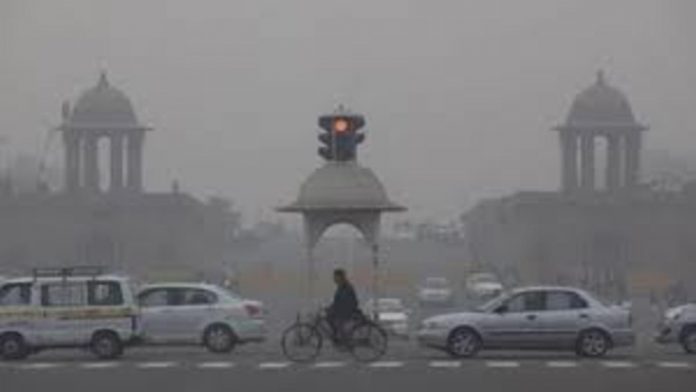 On Wednesday, Delhi’s air quality improved somewhat, with the 24-hour average air quality index (AQI) falling to 375 from 403 the day before. It is, however, nonetheless classified as “extremely poor.”

Meanwhile, the Centre informed the Supreme Court that its team met with Delhi and other northern Indian states to discuss pollution and has proposed ways to solve the problem.

Meanwhile, the Supreme Court slammed the Centre and the states, demanding to know what actions they have taken to reduce pollution. The court also chastised the bureaucracy for deferring to the courts in making decisions.

Here are the top developments during the day
1 Solicitor General Tushar Mehta informed a Supreme Court bench led by Chief Justice NV Ramana that the Commission for Air Quality Management (CAQM) has issued tough measures to reduce pollution in the Delhi-NCR.

The Centre stated that this includes the entire closure of all public and private educational institutions, a prohibition on truck entry with a few exceptions, and the closure of six thermal power plants within a 300-kilometer radius of the national capital.

On Tuesday, the commission held detailed consultations with Secretaries of the Ministries of Environment, Forest and Climate Change, Power, Department of Personnel and Training, and Chief Secretaries of Delhi and other states such as Haryana, Uttar Pradesh, Punjab, and Rajasthan, as directed by the Supreme Court.

2 During the Supreme Court hearing, the bench led by Chief Justice NV Ramana stated that all affidavits linked to traffic as a source of pollution in Delhi-NCR, and that farmers engaging in stubble burning should not be blamed.

Nobody is concerned, according to CJI Ramana, about farmers’ ability to obtain machines for stubble management. “What we have seen and are observing is that, regardless of the percentage, nobody is concerned about the farmer’s plight, what he is compelled to do, what are the reasons he has not been able to follow these scientific reports,” said the bench, which also included Justices D Y Chandrachud and Surya Kant.

“People in Delhi’s five-star and seven-star hotels keep criticising the farmers of being responsible for so much. Have you seen their per-land-holding earnings? How will they be able to pay for these machines? Please go and persuade them if there is a genuine scientifically based alternative “The bench has been added.

3 The Supreme Court also stated that the role of firecrackers, which are nonetheless used every year despite the ban, cannot be overlooked.

“Every year, when Delhi becomes clogged, this court is forced to take action. Please let us know what efforts the federal and state governments have taken “The bench remarked.

4 The Supreme Court also stated that it cannot get into the “nitty gritty,” and that the bureaucracy has formed a “kind of inertia” in terms of deferring to the courts.

“It’s time to call it quits. We won’t be able to dive into all of the details of the problem. Please take the necessary steps to address the emergency situation.”

“As a judge and an Advocate General, I’ve noticed over time that the bureaucracy has developed a type of inertia. They are adamant about not making a decision. This court must determine how to halt a car, confiscate a vehicle, and put out a fire. We have a lot of work ahead of us. This is a mindset that the Executive has fostered.”

“It’s apathy, pure and simple apathy,” he added as he set the case for a hearing on November 24.

“TV news outlets pollute the environment more than anyone else,” he said, referring to statements made in court that were taken out of context.

“Television debates pollute the environment more than anyone else. They have no idea what is going on or what the problem is. Statements are omitted from their context. Everyone has their own set of goals. We can’t help or control anything. We’re concentrating on finding a solution “The bench remarked.

6 Following the recommendations of the Commission for Air Quality Management, the Delhi government stopped trucks from entering the city with immediate effect until November 21.

“It is now ordered that entry of trucks into Delhi be restricted with immediate effect till 21/11/2021 or until further orders,” the Delhi Transport Department stated in a statement.

Trucks transporting critical commodities such as raw vegetables, fruits, grains, milk, eggs, and ice for human use, as well as tankers transporting petroleum products, will be excluded from the limitations.

7 The Delhi administration has put a moratorium on development and demolition in the city till November 21. It has also given its staff until Sunday to work from home.

The local government had previously announced that all schools, universities, and educational institutions would be closed until Sunday, and that construction and demolition activities would be prohibited until November 17.

8 The Centre has directed all of its employees stationed in the Delhi-NCR region to take public transportation as much as possible to and from work.

“In view of the prevailing pollution levels in the National Capital Region (NCR), all central government personnel stationed in central government offices situated in NCR are urged to use public transportation, as far as possible,” the Personnel Ministry said in an order.

The order stated that if staff are driving private or government vehicles, it is recommended that the vehicles be pooled to limit the number of vehicles on the road.

9 BJP spokesperson Sambit Patra slammed Delhi Chief Minister Arvind Kejriwal for his handling of pollution in the national capital, saying the Aam Aadmi Party administration wasted money on advertisements that might have been spent elsewhere.

Patra further cited an RTI response and a city government response in the Assembly, claiming that the Kejriwal government spent over Rs 15.80 crore on marketing to “teach” farmers throughout the country about the product.

The money would have been better spent, according to the BJP leader, in reducing pollution in Delhi rather than educating farmers about its benefits in states like Kerala.

10 The Noida Traffic Police have issued an advice barring heavy and medium-weight cargo vehicles from entering Delhi, as well as recommending alternative routes for those travelling elsewhere via the Peripheral Expressway.

According to the Noida Traffic Police, large and medium goods trucks (save those carrying vital supplies) issued until November 21 are absolutely forbidden from entering Delhi, in accordance with directives from the Commission for Air Quality Management in the NCR and neighbouring districts.