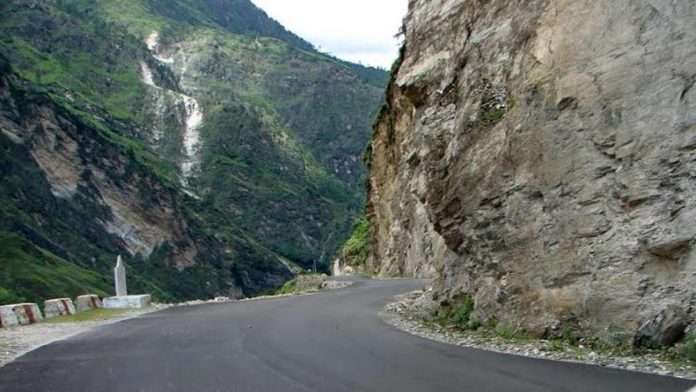 The Supreme Court ruled on Tuesday that the demands of defence and the environment must be balanced, and that a “nuanced” approach is required, while hearing an appeal against the widening of highways in Uttarakhand hills for the “Char Dham project.” While a non-profit objected to the road widening, citing the removal of trees in the wildlife-rich area, which has resulted in an increase in landslides, the Centre sought court clearance to widen the roads to the border to 10 metres.

The Char Dham highway project, which links the four Garhwal Himalayan shrines of Gangotri, Yamunotri, Kedarnath, and Badrinath, includes an 899-kilometer road that the Centre intends to widen near Dehradun.

The Supreme Court had previously stated that highways could not be broader than 5 metres in total.

The Centre had emphasised the “enormous” Chinese force buildup on the other side, saying that “large highways are of strategic importance” in the circumstances.

“On the opposite side, China is erecting helipads and buildings… therefore trucks carrying artillery, rocket launchers, and tanks may have to pass along these roads,” Attorney General KK Venugopal, defending the Centre, had stated.

Senior advocate Colin Gonsalves said, representing the non-profit Citizens for Green Doon, drew the court’s attention to the massive landslides this year, “which has exacerbated the damage on the mountains,” he added.

“I am not going to say that environmental needs trump the defence of the nation but the Army has never said we want these wide roads. Someone high up in political power said we want highways on the Char Dham yatra. The Army reluctantly went along,” Mr Gonsalves said.

He also cited an earlier case in which the Supreme Court halted 24 projects after cloudburst in 2013, when the issue was brought to their attention. Around 17 hydropower plants were built side by side in the Himalayas, causing cloudburst damage, according to Mr Gonsalves.

The court stated that national defence is a top concern that requires upgrading.

Attorney General KK Venugopal stated, “We do not want the military to be caught in a 1962 situation.”

However, Justice DY Chandrachud, a member of the three-judge panel, remarked that the needs of both defence and the environment “must be balanced.”

“We must tell you our predicament in this,” he said. “If the Centre says they are doing it for tourism, then we understand and we can impose more stringent conditions. But when it is needed to defend the borders then it is a serious predicament and court has to be more nuanced.”

The court, he said, cannot deny the fact that at such a height the security of the nation is at stake.

“Can the highest constitutional court say that we will override the defence needs particularly in the face of recent events especially for environmental concerns — or should court have more nuanced approach?” he said.

Pointing to the rapid melting of glaciers, he said it is also happening due to rampant developmental projects.

Mr Gonsalves was questioned by Justice Surya Kant if he had any reports on the state of the Himalayas on the other side of the border, where the Chinese are said to have built structures and companies.

“The Chinese government is not known for its environmental stewardship. We’ll see what we can do about getting reports on the situation there “Mr. Gonsalves stated the following.

The hearing will resume the following day.