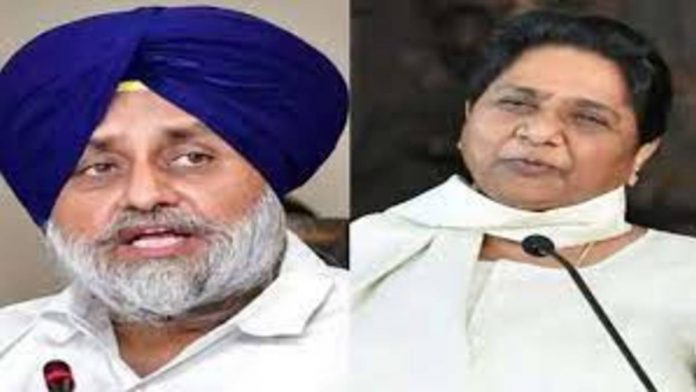 Ahead of the state assembly elections next year the Shiromani Akali Dal (SAD) has formed an alliance with the Bahujan Samaj Party (BSP) after breaking ties with Bharatiya Janata Party last year over Centre’s contentious farm bills. The details about the new alliance will be announced today.

According to the sources, with this newly formed alliance SAD is aiming to fill the gap in several seats after its split with BJP last year.

The two parties have joined hands after 1996 Lok Sabha elections when their alliance had won 11 out of 13 seats it contested in Punjab. The Mayawati-led BSP had won all the three it contested while SAD had won 8 out of 10 seats.

Sukhbir Singh Badal is likely to behind this new alliance who last week had announced that his party was open to tie-ups except BJP, Congress and Aam Aadmi Party (AAM).

“We cannot align with these parties. We will form alliances and we are open to others. No chance to go with BJP at all,” Mr Badal had said.

The BSP has an extensive hold over the 31% Dalit votes in the state. The grouping of these votes in 23 seats of the Doaba area is more critical. Dalits establish nearly 40% of the population in Punjab.

The BSP is probably going to contest from 18-20 seats the Akali Dal earlier offered BJP during its alliance with the ruling party, sources say. The Akali Dal was the most seasoned partner of the BJP tracing back to 1992.

Akali Dal used to be the senior accomplice in the alliance with the party contesting more than 90 out of 117 seats in the state. The rest went to BJP.

Also for Lok Sabha elections as well, Akali Dal handled applicants in 10 out of 13 seats while the BJP got three.

Akali Dal pulled out of the NDA in September last year over the three contentious agriculture bills, which set off farmers’ protest, mainly by the farmers of Punjab and Haryana. As the bills were introduced in the Lok Sabha, the solitary Akali minister in Prime Minister Narendra Modi’s cabinet, Harsimrat Kaur Badal, quit. The minister’s resignation from the cabinet that passed the bills had drawn huge criticism in the state.

Few days later, Sukhbir Badal called the bills “lethal and disastrous” for its key voter base of farmers and quit the NDA.

The Akali Dal and the BSP, which was battling solo in the state, saw a plunge in vote share in the 2017 assembly elections contrasted with the 2007 elections. The Akali Dal-BJP alliance came to power in 2007 preceding being removed by the Congress in 2017 that won a flat out dominant part in the state by winning 77 seats.