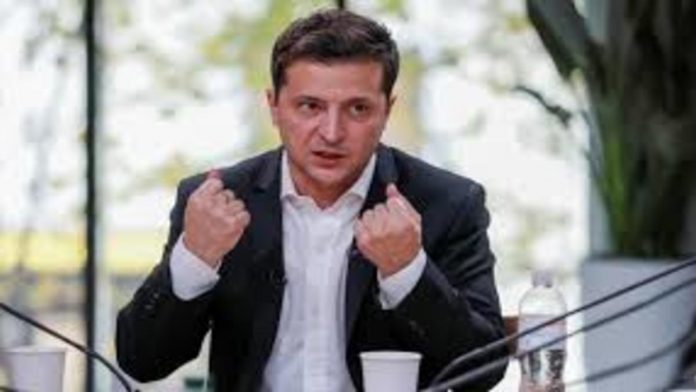 Ukraine’s President Volodymyr Zelensky cautioned on Tuesday that his country is “not intimidated” and “will not yield anything to anyone” after Russia acknowledged rebel-controlled territory in the country’s east and dispatched troops to maintain calm.

“Russia’s activities are a violation of Ukraine’s territorial integrity and sovereignty,” Zelensky stated in an early morning speech to the country.

He went on to say that Russia is simply legitimise the presence of Russian military in the Donbas since 2014, when Russia attacked and annexed Crimea. According to The Kyiv Independent, Russia has denied having any military presence in Ukraine.

The current conflict was exacerbated when Russian President Vladimir Putin declared two separatist areas in eastern Ukraine to be independent and ordered the Russian army to start a “peacekeeping” mission in the region.

Putin, flanked by separatist leaders backed by Russia, signed a decree recognising the independence of the two Ukrainian breakaway areas, the self-proclaimed Donetsk People’s Republic and the Lugansk People’s Republic, as well as cooperation and friendship agreements.

Putin identified Ukraine as a vital part of Russia’s history and stated eastern Ukraine was ancient Russian land in a lengthy televised address. Putin also expressed confidence in the Russian people’s support for his decision.

As a result, US President Joe Biden signed an Executive Order prohibiting all new investment, trade, and finance by US people to, from, or in the “so-called Donetsk and Luhansk People’s Republics” on Monday (local time).

“I have signed an Executive Order to prevent Russia the opportunity to profit from its obvious violations of international law,” Biden declared on Twitter. On the next steps, we’re continue to communicate closely with allies and partners, including Ukraine.”

“Russia’s pledges under the Minsk agreements further undermine the peace, stability, sovereignty, and territorial integrity of Ukraine, and thus constitutes an uncommon and extraordinary threat to the national security and foreign policy of the United States,” Biden wrote in the prohibition order.

For the past eight years, Ukrainian military have fought separatists supported by the Kremlin in eastern Ukraine. Putin requested an immediate halt to hostilities, stressing that “all responsibility for the probable continuation of violence will be wholly and entirely on their conscience.”

The United States and the Council of Europe criticised Russia’s move and urged on Moscow to rescind its recognition of Ukraine’s breakaway territories during a UN Security Council emergency meeting on Ukraine.

“We urge Russia return to the table for dialogue,” Ukrainian Ambassador to the United Nations Sergiy Kyslytsya stated. We reject the order to deploy more Russian occupation forces in Ukraine’s territory. We demand a quick and total evacuation of occupation soldiers that can be verified.”