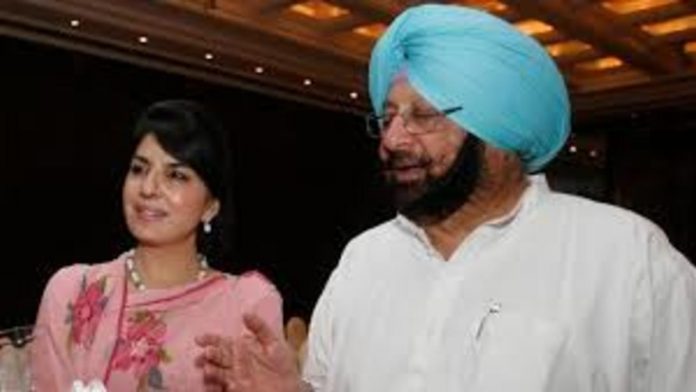 Captain Amarinder Singh’s long-time friend and former Pakistani journalist Aroosa Alam has been drawn into the Punjab political slanging match. She denied all charges of linkages with the ISI and of influencing Amarinder Singh when he was Punjab Chief Minister in an exclusive interview with India Today from Islamabad on Wednesday.

NOT LOVERS, BUT SOULMATES
Aroosa Alam said they were soulmates, not lovers, in response to rumors of an affair with Amarinder Singh.

“We’ve been friends for a long time. I was 56 years old when I first met him, and he was around 66. You are not searching for lovers at this age. “We were soulmates, friends, and companions,” she claimed.

“We met at a point in life where love affairs and romance don’t matter,” she explained. We’ve been soulmates and good family friends for a long time. I’ve met his mother, his sisters, and his family.”

Sukhjinder Singh Randhawa, the Punjab Deputy Chief Minister, used religion to claim that “love affairs” were not permitted in the Sikh religion. “Living with another woman is deemed improper even in Gurbani.” On the matter of Aroosa Alam, Captain and I also fought in America,” he stated on Tuesday.

Randhawa announced last week that Alam’s alleged ISI ties will be investigated. Captain Amarinder Singh retweeted a series of tweets from his media advisor Raveen Thukral. He accused the deputy chief minister of using “personal assaults” against him.

He said, “You served in my cabinet as a minister. You’ve never complained about Aroosa Alam. And she’d been coming for 16 years, with all the necessary approvals from the Indian government. Or are you claiming that during this time period, both the NDA and the Congress-led UPA governments colluded with Pakistan’s ISI?”

PERMITTED ENTRY INTO INDIA FOR A PERIOD OF 16 YEARS
Aroosa Alam dismissed the charges, claiming that lawmakers are questioning India’s security services when they claim that an ISI agent has been permitted to enter the country for the previous 16 years.

“Getting a visa for a Pakistani is a long and difficult process including numerous security and background investigations. A number of organizations are involved. For the past 16 years, I have traveled to India and have cleared security each time. How did I get ISI connections that the agencies didn’t know about for so long? If I were an ISI agent, it would implicate your security agencies as traitors for allowing me to enter for so long,” she claimed.

A GROUP OF HYENAS
“They are a group of hyenas,” she stated, referring to the former Chief Minister’s critics. They are opportunists and traitors. Politics in Punjab has reached a new low. All of this stems from a desire for power. Everyone aspires to be the Prime Minister.

“These are overachievers who wanted a piece of the pie,” she explained.

“Not a single posting took place without Aroosa being compensated or receiving a gift. Captain should also go to Pakistan and enjoy his time there with her, as she has taken all of the money with her. We were never taken seriously because I never let my husband (Navjot Singh Sidhu) get near to Aroosa,” Navjot stated.

Alam retaliated by launching a personal assault on the Sidhu couple. She advised them to examine their own honesty before questioning the integrity of others.

“When Captain Sahab was in opposition, I was with him for 13 years.” How could I know the SP, SSPs, or DSPs when he wasn’t in charge for so long? How do I keep track of posts and transfers? “I have no idea which minister had which portfolio,” she admitted.

“When he became the chief minister, he despised my discussing politics with him,” she continued. He always told me to have fun, socialize, and meet new people. “Avoid politics at all costs.”

“Anyone can lodge allegations,” Aroosa Alam said of the personal attacks. I’m sure I could do the same. For years, she hasn’t lived with Navjtot Singh Sidhu. Her husband was stationed in Mumbai, and she was in charge of the ministry. I overheard comments about his inefficiency and the fact that no work was being done because of a lack of funds.”

She also stated that the controversy in India had a significant impact on her children and family. “They’ve asked a lot of questions, and I’m stumped.” My children have been impacted. They used to warn me, and now I’m paying the price,” she explained.