“Real Chief Minister Does Not Have To Struggle For Chair,” Says Sonu Sood 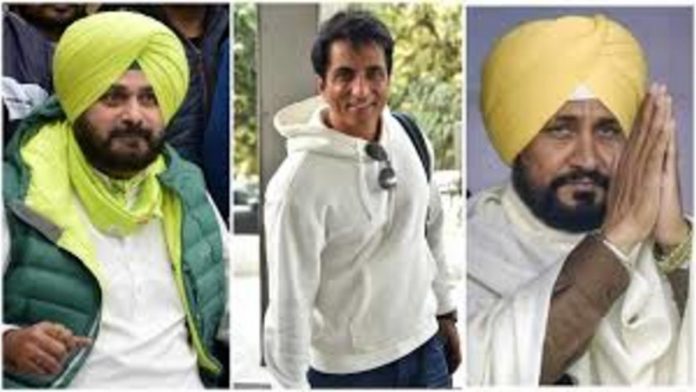 The video shows Chairman Minister Channi at various occasions and comes amid a reported feud between Channi and Punjab Congress chief Navjot Singh Sidhu about who should be named the Chief Ministerial candidate ahead of the Punjab assembly elections. The campaign video does not include Sidhu, who has spoken about reforming “the system.”

Actor Sonu Sood, whose sister Malvika Sood, has been declared Congress candidate from Moga, says in the video that the “real chief minister, the real king is the one who has to be forcibly brought to the chair and who does not have to struggle for it.”

“Punjab is saying that now we are with hand (Congress poll symbol), we will strengthen it,” the party said in the tweet.

The party has yet to name a candidate for head of state. After Capt Amarinder Singh resigned as Chief Minister in September last year, Channi was picked up by the Congress leadership, and the split was acrimonious.

In the midst of a rumoured squabble within the Punjab Congress over the designation of a chief ministerial candidate ahead of the assembly elections, Sidhu said on Thursday (January 13) that he is “not running for any post” and lashed out at the “system,” which, he claimed, “could not give justice” in cases of sacrilege and drugs.

Sidhu appeared to threaten the party’s state government as well as the party’s central leadership, which has made decisions about Punjab leadership for the last five years, in his tweets. “It`s either this system will stay or Navjot Singh Sidhu,” he said indicating that he may quit if there is change desired by him.

He had also said the system is being run by “mafias in connivance of mischievous politicians”.”A system which could not give justice to our Guru and could not punish the big fishes involved in the Drug trade needs to be demolished. I categorically state that Im not running for any post and its either this system will stay or Navjot Singh Sidhu,” he said in a tweet.

Sidhu alleged that the glory of Punjab has been “annihilated by the nexus of few political leaders and mafia”.

“The fight is to change this system which has eroded Punjab like termites and is being run by Mafias in connivance of mischievous politicians. This system cries for a change and reforms as the glory of Punjab has been annihilated by the nexus of Few political leaders and Mafia,” he said.

Sidhu has already chastised the state’s ruling party for “inaction” in cases including the desecration of the Guru Granth Sahib and consequent police firings in 2015, as well as the drug trade, and he brought up these problems again in his latest tweets.

Sidhu has previously stated that filing a FIR under the NDPS Act against Akali leader Bikram Singh Majithia was insufficient and that he would not rest till he was arrested. The High Court has granted Majithia interim bail.

Punjab will vote on February 20th, and the ruling Congress party will face internal problems in addition to a multi-cornered election.