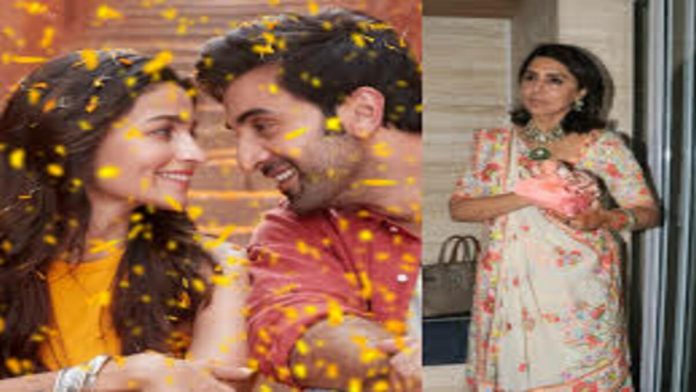 The much-anticipated wedding festivities for Ranbir Kapoor and Alia Bhatt began on Wednesday afternoon with a mehendi ceremony at Ranbir Kapoor’s Pali Hill mansion Vastu. While interior photos from the ceremony are expected, the bride-to-mother be’s Neetu Kapoor and sister Riddhima Kapoor Sahni made up for it by walking out and posing for the cameras afterward. Riddhima looked stunning in a sequined saree, while Neetu Kapoor wore a floral saree. The mother-daughter combo were in the mood to pose, so that’s exactly what they did.

Neetu Kapoor was seen arriving at the location earlier in the day with her daughter Riddhima, granddaughter Samara, and son-in-law Bharat Sahni. With a namaste, she greeted the paparazzi. Neetu Kapoor waved to the photographers after a fast clothing change.

In 2018, Alia Bhatt and Ranbir Kapoor started dating and made their first public appearance together at Sonam Kapoor’s wedding reception. Both performers have been spotted together and with each other’s families on numerous occasions. In 2018, Alia declared her romance with Ranbir public on Instagram. In a 2020 interview, Ranbir, who is a social media recluse, revealed his connection with Alia Bhatt, referring to her as his “girlfriend.” The celebrity pair is due to tie the knot tomorrow.

Neetu Kapoor was married to actor Rishi Kapoor, who died in April 2020 in Mumbai after a two-year battle with cancer. He was 67 years old at the time. Riddhima Kapoor Sahni is a jewellery designer located in Delhi. Ranbir Kapoor, the son of Neetu and Rishi Kapoor, is also a prominent Bollywood actor. Jug Jugg Jeeyo is Neetu Kapoor’s upcoming film, which also stars Anil Kapoor, Kiara Advani, Varun Dhawan, and content creator-actor Prajakta Koli. Raj Mehta directed the film, which has been sponsored by Karan Johar’s Dharma Productions. She is presently a judge on Dance Deewane Juniors, a TV reality show.