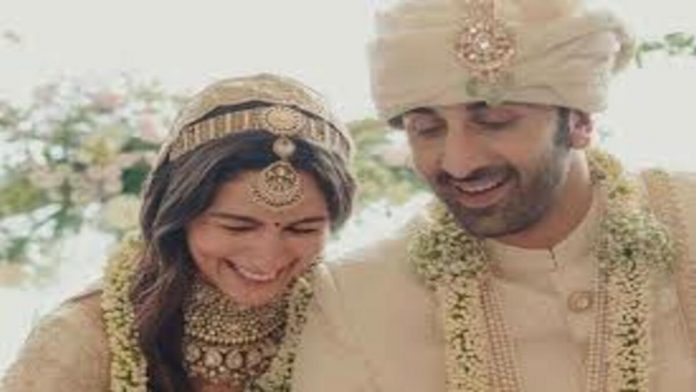 Alia Bhatt and Ranbir Kapoor have upgraded their relationship to man and wife after dating for approximately five years. The wedding was held in Mumbai’s Vastu building, where Alia and Ranbir each have their own apartment. Alia and Ranbir finally made their first public appearance and posed as Missus and Mister after the couple’s first images from their post-wedding terrace shoot went viral.

Ranbir Kapoor and Alia Bhatt have married! Alia, who had kept her social media posts to a minimum during her wedding, has finally shared dreamy photos from her intimate wedding with ‘husband’ Ranbir. We can’t stop staring at the stunning photographs the married actress shared with her husband Ranbir Kapoor. Alia was stunning as a bride, and we couldn’t stop staring at her! And what about Ranbir? Shehzada (prince), as Rakhi Sawant correctly stated.

“Today, surrounded by our family and friends, at home in our favourite spot – the balcony where we’ve spent the last 5 years of our relationship – we got married,” Alia wrote. We can’t wait to make more memories together, memories full of love, laughter, comfortable silences, movie nights, silly fights, wine delights, and Chinese bites, with so much already behind us. Thank you for all of the love and light you have shown us during this difficult time. It has only added to the significance of this moment. “Best regards, Ranbir and Alia (sic).”

Ranbir Kapoor’s wedding will be preceded by a baraat ceremony, according to reports. The baraat, however, will not take place, according to the news agency. “A rumour indicated there would be a baraat,” a source close to Ranbir Kapoor remarked. However, sources state that no permission has been sought from the Pali Hill officials to hold a baraat parade on the route leading to Vastu. The only additional permission granted is for police protection and security in and around the building to be increased after 2 p.m. As a result, there won’t be any baraat.”