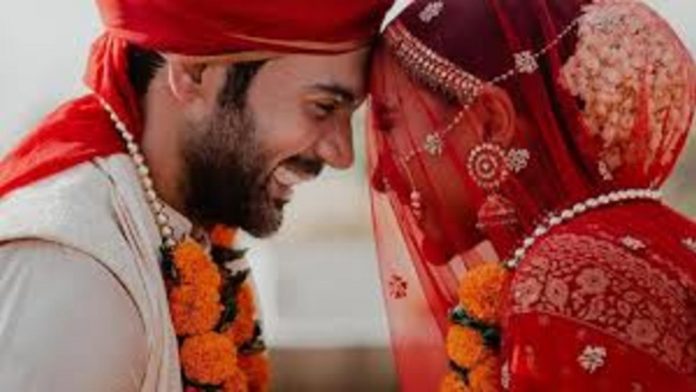 On November 15, Rajkummar Rao and Patralekhaa wedded in a small wedding ceremony. To share the good news with their fans, the couple released gorgeous images from their wedding. The wedding of Rajkummar and Patralekhaa took place in Chandigarh, in the presence of the couple’s close friends and family.

THE WEDDING OF RAJKUMMAR RAO AND PATRALEKHAA
Patralekhaa and Rajkummar Rao dated for more than a decade and established relationship goals for their admirers. They married on November 15th. Rajkummar uploaded photos from his wedding on social media and informed his friends and followers of the good news. He captioned it, “Finally after 11 years of love, romance, friendship and fun, I got married to my everything today, my soulmate, my best friend, my family. Today there is no greater happiness for me than being called your husband @patralekhaa Here’s to forever .. and beyond @patralekhaa (sic).”

Patralekhaa also posted photos from the wedding with the caption, “I got married to my everything today; my boyfriend, my partner in crime, my family, my soulmate…My best friend for the last 11 years! There is no greater feeling than to be your wife! Here’s to our forever… @rajkummar rao (sic).”

THE LOVE STORY OF RAJKUMMAR RAO AND PATRALEKHAA
The love storey between Rajkummar Rao and Patralekhaa is nothing short of a fairytale. Patralekhaa made her Bollywood debut in 2014 with CityLights, opposite Rajkummar. She had first seen him in the film Love Sex Aur Dhokha (LSD), and he had first seen her in a commercial.

Patralekhaa has commented about her initial impression of Rajkummar, “I saw him for the first time on-screen when I watched LSD.” I assumed the strange character he played in the movie was representative of him in real life. My opinion of him had already been tainted. He later informed me that he first saw me in an advertisement and thought to himself, “I’m going to marry her.” It was hilariously ironic.”

Rajkummar Rao and Patralekhaa are now happily married. Isn’t this a lovely story of love?